You are here: Home / Alex Van Halen / 60 Years Ago: The Van Halen Family Travels by Boat to America Today marks a historic anniversary for the Van Halen family…

It was 60 years ago today that the Van Halen family traveled from Holland to America! (the newly discovered passenger list below proves the date was March 9th, and not February 22nd, as we previously thought).

While living in Holland, Jan and Eugenia Van Halen received letters from relatives describing the wonders of California. Despite Jan’s achievements in his musical career, the family was convinced Jan could find even greater success in America.

So, on March 9th, 1962, the Van Halen family departed Holland by steamship. In their possession were a few suitcases, 75 Dutch guilders (the equivalent of about 15 American dollars) and a piano. It was a nine-day boat ride, and to help pay their fare, Jan, Edward, and Alex provided the ship’s musical entertainment. From New York the family took a four day trip by train to California.

“Alex and I actually played on the boat while we were coming to America. We played piano, and we were like the kid freak show on the boat,” Eddie recalled.

Jan and Eugenia risked everything by taking their two beautiful boys and immigrating to America. Once they settled in California, they continued to inspire his boys to become musicians.

This truly historic photo was taken on the very boat that carried the Van Halen family to America. Left to right: Alex, Jan, Eugenia and Edward.

Thanks to the late Eugenia Van Halen for giving us a copy of this photo from her private collection back in the 1990’s. We first published it in issue 15 of The Inside Van Halen magazine.

Despite Pasadena’s advantages, the family’s dream of a better life did not initially come to pass. Instead of finding themselves in a suburban dream home, the Van Halen family rented a cramped apartment at 486 South Oakland Ave. Their new home was so modest that all three families in the building shared the same bathroom. Over the next four years, the family would relocate in Pasadena at least two more times.

During their first months in America, the Van Halen clan had bigger problems than housing. “My dad couldn’t speak the language… and he didn’t even know how to drive a car, because in Holland you ride bicycles, at least back then,” Edward said, as he recalled his father’s first American job as a dishwasher at Arcadia Methodist Hospital. Because his father didn’t even own a bicycle, he walked 6 miles each way to work, and his mother pitched in by working as a maid. These difficulties lead their youngest to call the “American dream” that had brought them to America “a crock of shit.”

Of course, Jan had hoped to support his family through music. “For my dad, America was the land of opportunity,” Alex remembered. Then he found out differently, of course. The big band thing wasn’t happening here either.” In fact, when it came time to provide the city of Pasadena with information for the 1962 city directory, Jan listed his occupation as a “machinist.” Nevertheless, Jan did find some part-time work as a musician.

For the brothers, the language and cultural barriers that initially separated them from their peers drew the two together. Alex explained, “The only friends we had were each other. That’s part of the reason we’re so close. It had a lasting effect on us in terms of [being able to accept] traveling and touring and not being sure what the next day brings.” Edward agreed, adding, “We were two outcasts that didn’t speak the language and didn’t know what was going on. So we became best friends and learned to stick together.” Still, in the months that followed, the brothers began to build friendships with kids they met in school and in the neighborhood.

As the brothers acculturated, their parents’ hard work began to pay off. On April 27, 1966, they purchased an 896-square foot home located at 1881 Las Lunas Street in Pasadena. Still, the Van Halen’s remained far from prosperous. George Courville, who lived nearby and has known the Van Halens since he was seven years old, remembers, “They had the smallest house on the block. These were all Pasadena bungalow homes. There were two bedrooms. The kids had one room and the parents have the other. There was a single bathroom, a living room, a dining room, and what they called a galley kitchen.”

Yeah, my dad played on the boat, and Alex and I did our little piano thing as a sideshow. Dad would pass the hat, and we’d make another $20. We moved to the U.S. when I was 8, and my dad ended up having to walk, like, six miles from Pasadena [Calif.], where we lived, to the Arcadia Methodist Hospital to wash dishes because he couldn’t make it playing music. He had, like, four jobs, and he would gig on weekends playing proms and bar mitzvahs, anything he could get. When we got here, his first thing was to find us a great piano teacher. And he found this Russian guy named Stasskalvitis. We were being trained to be classical pianists, little Vladimir Horowitzes. I actually won first place three years in a row at Long Beach City College.

Van Halen fan Steven Kutz discovered the ship’s manifest on Ancestry.com, showing the Dutch immigrants on the ship. The Van Halen family is listed on lines 11 through 14. 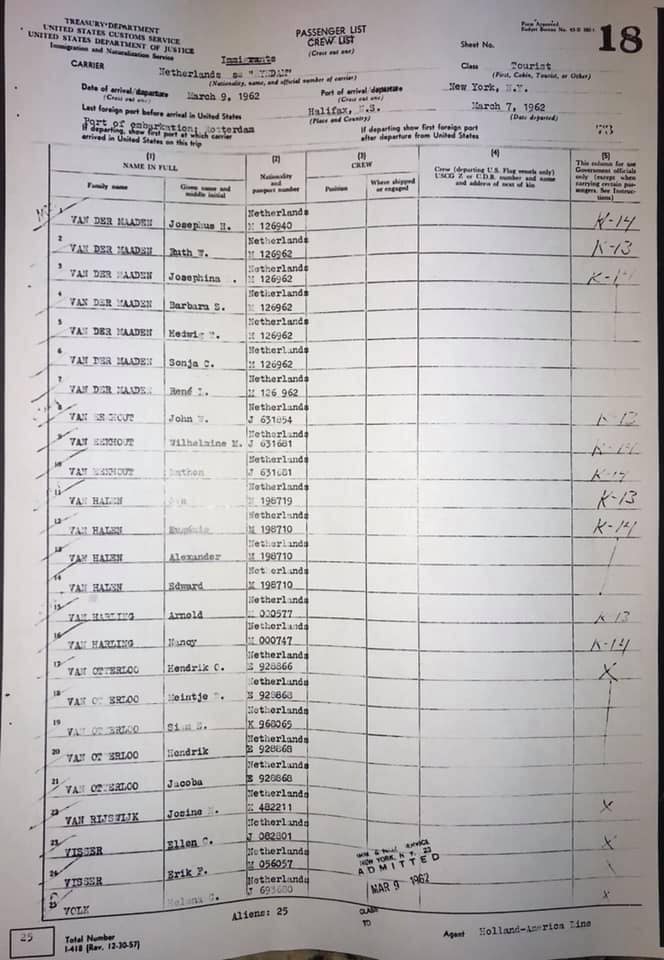