One of the oldest known Van Halen songs and written in the early seventies, this song was frequently performed in the backyard party days. (The only other times it was ever performed was at every night on the 1979 tour and a few select nights in 2012).

Because Eddie dominated the mix on the Van Halen album, some of the Van Halen II album was supposed to highlight Alex and Mike. This particular song showcased Alex’s powerhouse drumming style.

Eddie: “‘Outta Love Again’ is kind of a fast, funky riff sort of like “What Is Hip?.” Everyone can relate to that – everyone falls in love and out of love. I really like that song because it really makes the drums shine. That kind of pissed me off about the first album, that there weren’t enough drums. but on this album there are a lot more spots where the drums and bass are spotlighted, as opposed to the guitar. And that’s one of the songs where I think the drumming is real good.” 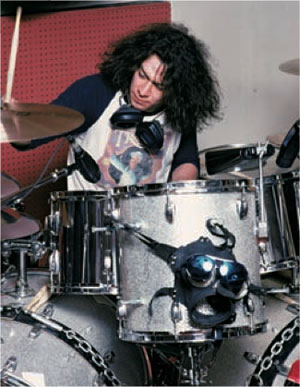