On this week in 1984, Van Halen’s colossal hit “Jump” reached #1 on the Billboard Hot 100. “Jump” knocked out Culture Club’s “Karma Chameleon” to hold the top spot on the Billboard Hot 100 for an impressive FIVE straight weeks!  The song thereafter secured its place among rock music’s most popular songs, and is now considered by some to be one of the most influential and memorable rock songs of all time. On the back of its simple pared-down performance video, it helped the 1984/MCMLXXXIV album sell an astonishing eight million copies worldwide in the first ten months of 1984, alone. 2) Parts of “Jump” had originally been written on the back of a tour bus, possibly as early as ’79 or ’80. However, the band had always felt the song didn’t quite fit any of the albums they’d been working on. David Lee Roth and Ted Templeman were the biggest opponents of Eddie’s keyboard songs and consistently vetoed recording this song for more than two years.

3) When Eddie gained control in the studio by building 5150, he was able to record more with just Alex and Don Landee. One day the three laid down the basic tracks to the song and presented it the following day to Dave, Mike, and Ted. Whether the rest of the band truly loved the song or felt somewhat compelled to record it is not known, but soon Dave was writing lyrics for it. 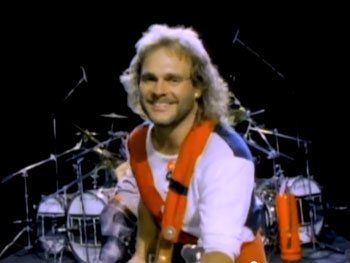 4) David wrote the lyrics around a single phrase: “Go ahead and jump.” He came up with the line after watching the news and seeing a man on top of the Arco Tower threatening to commit suicide. The vocalist thought that there’s always at least one person in the crowd telling the guy to “Go ahead and jump.” Roth says he wrote the lyrics as he was driven around Los Angeles in his Mercury convertible listening to a tape of the instrumental track.

5) Eddie recorded the song using an Oberheim OBX-A keyboard. The solo was spliced together from at least two different takes. The recording was completed in one day. 9) This song appeared on the albums 1984, Best of Volume 1, Live: Right Here, Right Now and The Best of Both Worlds. 10) The music video for “Jump” (the first from the album 1984) was produced by Robert Lombard and directed by Pete Angelus. It was a straightforward concept, much like many of the hard rock videos of the time. It shows the band performing the song at a mock concert. It was nominated for three MTV Video Music Awards, and won “Best Stage Performance” for the video.

11) It was filmed using 16mm hand-held cameras at The Complex in Santa Monica, CA. Although David Lee Roth claimed the total cost was only $600, the actual cost was much higher.

12) The audio in the video differed slightly from the album version. (During the keyboard solo prior to the final refrain, David Lee Roth is heard (and seen) yelling out. He did this during the band’s mock performance for the video’s filming, and it is believed that afterwards he overdubbed this yell especially for the video version since it is not present in the song to begin with). Sharp-eyed viewers will also notice Eddie’s keyboard is quite dusty. 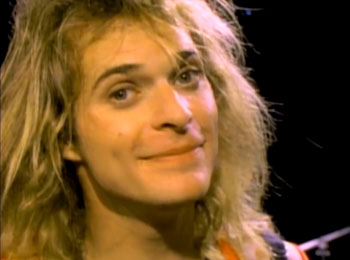 Eddie previously played synthesizer on songs like “One Foot Out the Door” and “Dancing in the Street,” but here he plays his Oberheim OB-Xa like a true keyboard instrument instead of a surrogate guitar. “Certain people didn’t want me playing keyboards because they thought I should only be a guitar hero,” he recalled. “But hey, I’ll play Barvarian cheese whistle, if I can play it well – whatever that is.” Ed called his guitar solo – spliced from two separate cakes – his favorite solo he ever wrote.