You are here: Home / 2019 / Edward Van Halen’s ‘Panama’ Lamborghini Has Been Discovered 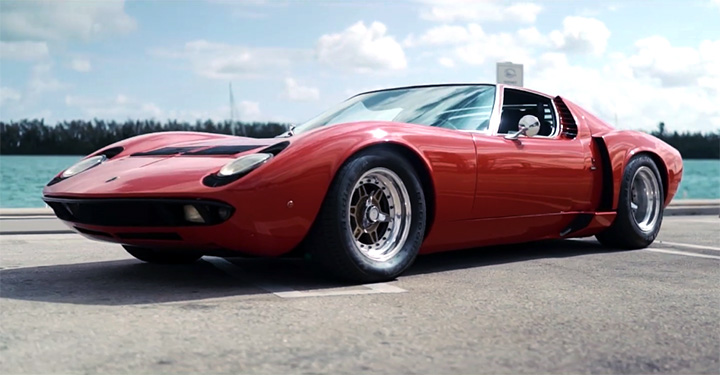 It’s the VROOOM heard ‘round the music world 35 summers ago.

Back in June of 1984, long before the days of the internet, many rock fans were left scratching their heads trying to figure out just what was that distinctive sound heard right after Eddie’s scorching guitar solo in the latest Van Halen single “Panama”. Eventually it was revealed that the sound came straight from the exhaust pipes of Edward’s very own 1972 Lamborghini which has recently resurfaced.

John Temerian, a vintage supercar enthusiast and entrepreneur, just posted a video about the Lamborghini Miura “Widebody” formerly owned by the legendary guitarist. Temerian called it “one of the most exciting discoveries” he’s ever made.

“This is a car that was a wedding gift to Eddie Van Halen from his former wife Valerie Bertinelli,” said Temerian in the video uploaded by Temerian on the YouTube channel Curated TV. “The license plate still wears their wedding date, APR 11 for April 11th.”

Temerian then told the story of how he was able to purchase this one-of-a-kind vehicle.

“I get a phone call from a very good friend of mine. He tells me that Eddie Van Halen wants to sell his car collection,” said Temerian. “It always intrigued me because no one really knew the history of Eddie Van Halen’s car. It had these crazy vents on the side and these massive wheels. There were always rumors. Was it a factory car? Was it modified? Was it a Hot Rod Miura? I told my friend, ‘We have to buy the car, we have to figure it out just because of the Van Halen history.’”

Watch the video below to find out what Temerian has found out about the car formerly owned by Edward. It also includes some nice shots of the car in action. This is part one. We’ll post part two as soon as it goes up:

Here’s the classic video for “Panama” in which Edward uses his Lamborghini during the bridge. He backed the car up to the “5150” studio and attached microphones to the exhaust pipes to capture the perfect sound. You can hear them revving up at the 2:44 mark:

To find out more on John Temerian, Curated and Curated TV go to wearecurated.com.

Below is a picture of Ed spotted in the same Lamborghini from three years ago.