Who wouldn’t want to throw on a Van Halen t-shirt, some leopard skin pants, jump onstage with their friends, and perform an all-Van Halen set in front of a huge crowd on the beach during a beautiful day? 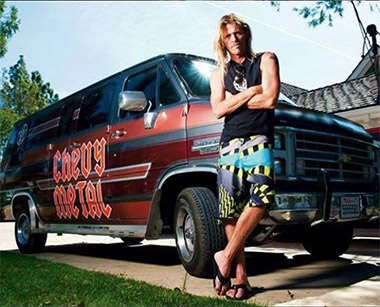 That’s exactly what Foo Fighter drummer, Taylor Hawkins got to do over the weekend. His cover band, Chevy Metal, got the van looking real nice and drove down to Redondo Beach to perform an all-Van Halen set at the BeachLife Festival held May 3rd through May 5th in California.

Chevy Metal is Taylor Hawkins’ cover band he gets to have fun with whenever the Foo Fighters are on break. They primarily play lesser known tracks by ZZ Top, Aerosmith, Deep Purple, Van Halen, Queen, and Black Sabbath.

The band became a supergroup over the weekend, with former Nine Inch Nails drummer Josh Freese and Weezer drummer Patrick Wilson joining for the set of Van Halen covers.

“We’re a Van Halen cover band playing on the same stage as Brian Wilson,” he said. The band that started playing a Mexican restaurant in the valley may be a cover band, but got the crowd pumped with some classics.

Although the organizers asked for the band’s 1984 in entirety, they compromised with a greatest-hits, David Lee Roth-era only VH.

“I gotta tell you, being Van Halen for the day is pretty fuckin’ awesome.” Taylor told the crowd. “It’s the best fuckin’ set list you’re ever gonna find, right?”

The setlist (below) was mostly Van Halen hits, but he managed to squeeze in two of his favorite deep tracks, “I’m The One” from the debut album, and “Drop Dead Legs” from 1984.

Taylor sang most of the set, and managed to play some drums, as well, along with Josh Freese. Brent Woods and Mick Murphy were on guitar, and Wiley Hodgden was on bass (who also sang “Everybody Wants Some!!”)

Taylor Hawkins is a huge Van Halen fan. There’s video of him covering “Panama” for his high school’s battle of the bands competition, and the Foo Fighters performed a unique mashup of Van Halen’s “Jump” with John Lennon’s “Imagine” nightly on their 2018 tour. And just about every show of that tour, Taylor would wear either his black and white or red Frankenstein board shorts that he purchased directly from VanHalenStore.com.

Hot For Teacher
Romeo Delight
Runnin’ With The Devil
Eruption
You Really Got Me
Feel Your Love Tonight
Panama
I’m The One
Drop Dead Legs
Mean Street
Everybody Wants Some!!
Jamie’s Cryin’
Ain’t Talkin’ ’bout Love

Great gig Saturday playing all Van Halen with Taylor and @chevy_metal. He sang most the time, did some double drums together and had Pat Wilson join us for a song. Swipe for live shot and set list. Video to follow.

Behind The Chevy Metal:

EVH Leggings (get them here):

EVH Flip Flops (get them here):

Saturday afternoon. Can’t wait! #Repost @chevy_metal We will be rocking an all Van Halen set this weekend at @beachlifefestival with @joshfreese on drums. We gotta write a setlist- any ideas…?

Getting ready for the all VH set tomorrow with @chevy_metal at @beachlifefestival. Taylor H singing and a little double drum action here and there ? You don’t have to be a rockstar to look good wearing Van Halen shorts. (But it helps!)