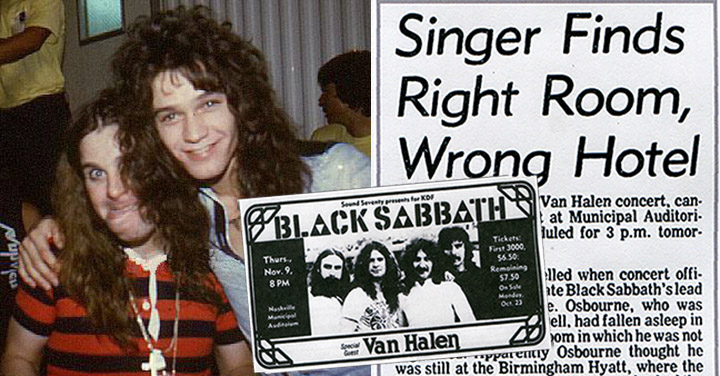 There is an old science-fiction movie from the fifties called Forbidden Planet, where the extinct inhabitants are called the Krell. So we started to call cocaine “Krell”, gave it a science fiction name. We would stay up all night, well into the next day, having what we called Krell Wars. And the best Krell War was when Van Halen was opening for Black Sabbath, in 1978. Ozzy Osbourne and I had a major Krell War until about nine-thirty in the morning.

We drove from Memphis to Nashville. Checked into a hotel. It’s an identical hotel, it’s like a Marriott something-or-other, an atrium Marriott, with the interior balconies, everything is enclosed, the hanging gardens vibe. Just like every McDonald’s you go to, it’s identical.

It was noontime, and I went right into the bin, fell asleep. Got up, we opened, sold-out show, 10,000 of our closest friends. We’re sitting backstage, and suddenly, two of the guys from Black Sabbath and some muscle burst through the door, This is not like a new question, to me. Ozzy had no idea where he was going, didn’t know where he was while he was there, and couldn’t tell you where he had been – a lot like Columbus. Newspaper concert ad for November 9, 1978  originally published in The Tennessean on October 22, 1978

“Ozzy hasn’t shown up. We’re not even sure he checked into the hotel. We can’t find him anywhere. We can’t do the show.”

“Oh, man. Last I saw, he was heading for the limousines, back in Memphis. And I haven’t seen him since. I turned belly-up, and I did my gig, and I have no idea where he is. ” Instantly, the police, the press, everybody’s involved. Ozzy has disappeared! He’s been kidnapped! By a cult! He’s gone. His drinking problem loomed a little too large, and he’s wandered off to some cave-like environment where he’s been killed. Dead.

They popped back through the door thirty minutes later.

“No trace. No footsteps. Can you sing some of the Black Sabbath songs?”

Show is canceled. Refunds all around.

Everybody goes back to the hotel. Major press. Ozzy has disappeared. All night, a vigil. It’s hell. The whole Sabbath band is in the lobby, sitting cross-legged, Indian-style, on the carpet, Morose.

Six -thirty in the morning, Ozzy comes walking out of the elevator. He’s back from the dead!

No he’s not. This character had gone into the new hotel, reached into his pocket, pulled out a key from the last hotel, looked at the number, got into the elevator, went right up to that room. There happens to be a maid cleaning up the room.

He says, “Get out of here!” She runs off in terror, he closes the door and falls asleep.

This is my life. We had to double around and make up the show. And I think that was the record, at that point. Some seven nights in a row. Seven shows in a row, with hops in between, which means six and eight hours on the tour bus, going to the next city.

This story is from David Lee Roth’s out of print autobiography, ‘Crazy From The Heat’. Used with permission. (Photos from VHND & Ross Halfin) Newspaper article published in The Tennessean on November 11, 1978 regarding the incident

Newspaper concert review of November 12, 1978 show originally published in The Tennessean on November 13, 1978

Thanks to Rodney “GA5150” for finding these newspaper articles.

Audio recording of the makeup show, Nov 12th, 1978 at the Nashville Municipal Auditorium.