Mark Stone performed bass with the Van Halen brothers from 1972-1974, when the trio was known first as Genesis, then as Mammoth, and then Van Halen.

Photos by Arpi A Szasz of ArpiPhoto.com

This weekend, I had a surreal experience.

On Friday, I was sitting with Ted Templeman at Vroman’s Bookstore in Pasadena about thirty minutes before my Van Halen Rising book signing began (much more about that coming soon at the Van Halen News Desk). The room was almost empty; rock photographer Kevin Estrada was one of only a handful of people there with us.

A woman and a man then approached the table. The woman had a copy of my book in her hand, and passed it to me. Ted and I said hello, and then I asked, “What would you like me to write?”

“Could you sign it to Mark, um, Mark Stone?”

I almost fell out of my chair.

Although Mark and I had talked a bit some years earlier, I had never met him in person. Introductions then followed; of course Ted knew exactly who Mark was and was thrilled to meet him. Kevin, too, was super-excited to meet Mark.

Mark then shook my hand and told me how much he’d enjoyed Van Halen Rising. As an author of a book on Van Halen’s early years, I was over the moon hearing that Mark thought I’d gotten the story right. After the signing ended, I told Mark that I was throwing a Van Halen Rising Launch Party at T. Boyle’s Tavern in Pasadena the next night.

“If you’d want to come, I’d love to have you. People would be so excited to have you there.”

“And if you wanted to play Mark, I know any number of people would love for you to sit in. There’s Terry Kilgore, and we’ve got a great tribute band called Fan Halen.”

“Yeah, alright. I’ll think about it.”

The next day, I called Mark and asked him if he’d be interested in playing. He said yes.

Wow. Mark Stone, the guy who was the bassist of Genesis and Mammoth and Van Halen, was going to play bass at the party!

That night, Mark and his wife showed up outside the club around 7:30. Mark was holding a bass guitar case.

I quickly escorted them inside the packed club, and then went looking for Derek Fuller of Fan Halen.

Derek then came over and met Mark. At that point, the two huddled up and started talking. I melted away and let them get acquainted.

While I wasn’t sure if it was going to happen, I sure hoped that Mark Stone would play with Fan Halen. 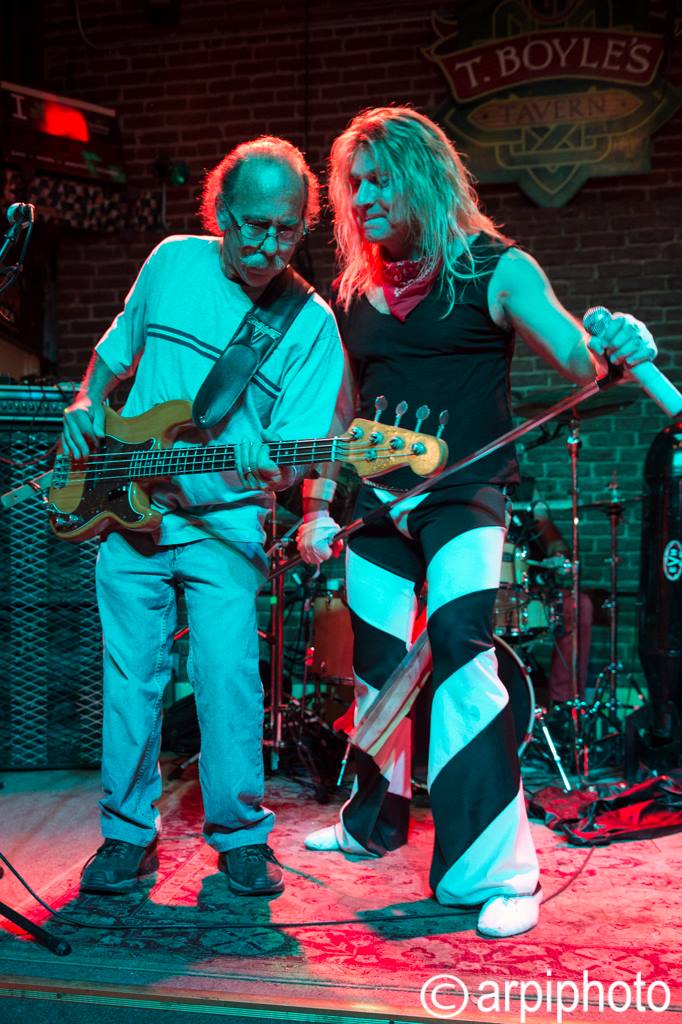 Shortly after nine, Fan Halen began blasting through their 1978 throwback setlist. I stood near the PA cabinet, geeking out as I watched the guys do note-for-note versions of VH songs.

About three songs into the set, I stepped to the edge of the tiny stage and yelled in Derek’s ear.

Derek looked at me with a twinkle in his eye and said, “We’ve got it all worked out.”

They sure did. Mark soon hopped up on stage, strapped on George DuBose’s bass, and launched into Ain’t Talkin’ ‘Bout Love.”

It was a surreal but awesome moment. Mark Stone was playing bass in a band that looks and sounds just like Van Halen did in 1978!

Mark’s performance was spot-on, and everyone was geeking out that Van Halen history was being made right here in the heart of Pasadena.

After Mark left the stage, he was all smiles and surrounded by admirers. He was beaming.

When I grabbed Derek and told him that this was an amazing thing, he told me that Mark hadn’t rehearsed the song at all. In fact, he’d never played it before tonight, since as we all know he’d left Van Halen some three years before the band wrote this classic VH tune.

When I heard that, I thought for a second — then it hit me. Of course Mark could play a song he’d never played before in front of a full house. He kept up with Edward and Alex Van Halen onstage for years.

Thanks Mark. You gave every Van Halen fan inside of T. Boyle’s Tavern a chance to witness history. For the full story on Van Halen’s early years with Mark Stone, get Van Halen Rising: How a Southern California Backyard Party Band Saved Heavy Metal, by historian Greg Renoff. You can get an author signed copy only at VanHalenStore.com.