EVH Gear has announce the deadly NEW EVH 5150IIIS Head Stealth with an in-depth demo from Eddie Van Halen himself!

Eddie Van Halen is continuing to make it even easier for fans to at least come close to imitating his iconic riffs. In the new demo video above, the founder and legendary guitarist of Van Halen tests out the 5150IIIS amp head, which recently joined the EVH Gear family at Fender, by playing some of his most iconic riffs, from songs like “Hot for Teacher,” “Light Up The Sky,” “Dance the Night Away,” and more!

While testing out the gear, Van Halen also showcases the subtle differences between the 5150IIIS and its predecessor the 5150III. The latest version of the amp head was born out of the guitarist’s desire to have a little “more gas in the tank” before his band’s 2012 tour. With his EVH Fender team, he saw his suggested circuit modification’s come to life in what he calls a “turbo-charged” version of the original amp head.

Watch this beast in action in the video above!

Said Van Halen: “It’s like a turbocharged 5150III, and some people are like, ‘Huh?’ because the standard 5150III is a mega-beast to begin with… But it’s even hotter.”

When Eddie Van Halen wanted a rig with “more gas in the tank,” EVH Gear delivered in the form of the loud and lethal 5150IIIS. Custom-modded to suit EVH’s evolving tastes, this powerful all-tube head is packed with new features for tailoring your low end, including new independent rear resonance controls and increased gain on channels two and three.

In the new video, the legendary guitarist puts the 5150IIIS’ deep bass contour and seamless switching to the test. Experience this seething addition to EVH’s own touring arsenal, with a “blackout” cosmetic treatment inspired by his main Wolfgang® guitar. 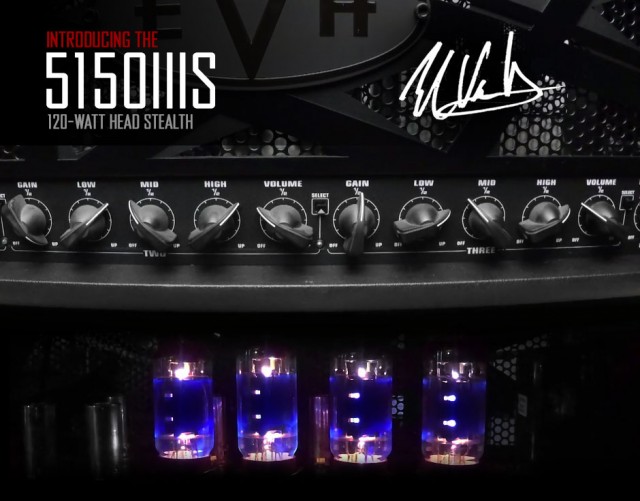 Experience the best of versatile tube tone and lethal new looks in the 5150IIIS 120-Watt Head Stealth. With newly added mod’s, it’s never been easier to capture authentic EVH sound—from clean to crunchy to searing lead—when dialing in your own personal settings.

For the player who can’t get enough EVH in their arsenal, the 5150IIIS is a sonic juggernaut specially voiced with Eddie’s touring specs in mind, including:

Find out what makes the 5150IIIS head as sexy in style as it is a powerhouse in sound, from “all-stealth” appointments to impedance controls and much more.

Learn more about the 5150IIIS at EVHGear.com.

Also, at Van Halen Store you can grab the new EVH Sneakers and the new EVH Nylon Guitar Strap that is Eddie’s wearing in the video. And you’ll get FREE shipping if you pre-order Van Halen’s first-ever live album with Roth at the helm, Tokyo Dome Live In Concert!