You are here: Home / 1979 / The Private Photo Shoot that Sparked a War Inside Van Halen Here’s a new article on some never-heard, behind-the-scenes drama that went on in Van Halen. Well get you started by featuring the article’s intro here on VHND, but be sure to click over to Medium.com to read the entire article. It’s a fascinating read. Enjoy! 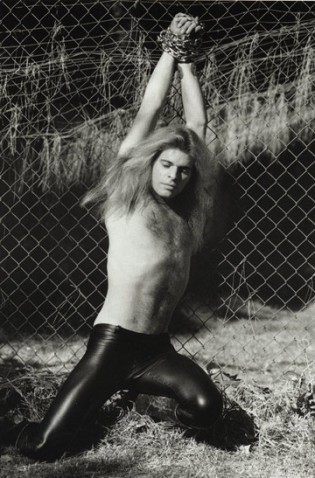 Van Halen’s star was on the rise in late 1979. Vocalist David Lee Roth, bassist Michael Anthony, guitarist Eddie Van Halen, and drummer Alex Van Halen had sent sold out crowds into delirium on their wildly successful 1978 and 1979 world tours. They had two platinum albums under their belts, and their latest, Van Halen II, had even cracked the Billboard Top Ten. These were significant achievements for a hard rock band at time when disco and new wave dominated the nation’s airwaves.

These triumphs aside, intra-band tensions (which Roth later conceded were “always” present) mounted as the quartet and its label, Warner Bros. Records, planned the visuals for the forthcoming Women and Children First.This battle took shape along familiar lines, with the group’s frontman squaring off against the Van Halen brothers. But Roth’s desire to have a portrait of himself, bare-chested and bound in chains, dominate the album’s art gave this round of conflict a particular intensity. In effect, Roth’s artistic vision threatened to overwhelm Van Halen’s collective identity as a group, something that the band’s namesakes weren’t willing to cede to Diamond Dave without a fight. When fans picked up Women and Children First in March 1980, Van Halen appeared as thick as thieves in the cover photos. But revealingly, there was no sign of the dozens of photos of the four musicians shot by the most important fashion photographer of the late 20th Century. The untold story of why these lost pictures have never surfaced—excepting two photos, including the risqué bondage-themed shot of Roth—and why images taken by another legendary photographer replaced them on the album sleeve sheds light on Van Halen’s internal dysfunction at the dawn of the 1980s. More importantly, the tumult surrounding these two shoots provided band insiders with a prequel to the titanic power struggles between the Van Halen brothers and Roth that would split the group in 1985.

Despite their success, Van Halen had little time to rest on their laurels in December of 1979. The industry’s relentless “album-tour” cycle, which had the power to turn breakthrough acts like Van Halen into superstars, demanded that the four musicians get to work on a new record, so they could hit the road again by the spring of 1980.

While Eddie, like a mad scientist, brought the monster riffs and hooks ofWomen and Children First to life, Roth began to write lyrics and contemplate the packaging of their forthcoming release. And when it came to shooting photos for the new album, Roth had someone special in mind: Helmut Newton.

READ THE ENTIRE ARTICLE on Medium.com by clicking the title below:

The Private Photo Shoot that Sparked a War Inside Van Halen