Feast your eyes on a real treat! Here’s some incredibly cool photos from 5150 studios that have just emerged, offering glimpses of many of Eddie Van Halen’s rarely seen guitars. These are definitely some of the very best (and only!) photos of Eddie’s axe collection that have ever come out of 5150. You just don’t get to see many photos of the inside of Van Halen’s studio—it’s almost weird seeing these!

These were posted on Facebook by a friend of the short-lived rock band Wildside, who actually recorded their album at 5150 circa 1991. 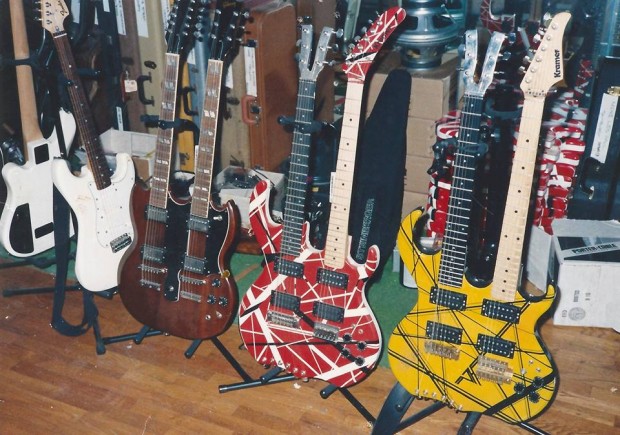 For more never seen photos of Eddie and his guitars, get the must-have coffee table book, Eddie Van Halen, by Neil Zlozower! For a true Visual Feast of never seen Eddie Van Halen photos, pick up the coffee table photo book Eddie Van Halen, by Neil Zlozower. ‘Zloz’ began accompanied the band on tour, shooting concerts and portraits, and becoming a close friend. His intimate and extensive access makes Eddie Van Halen a ten-course meal for Van Halen lovers. If you like your rock photos rare, this book sizzles with visceral slices of Van Halen’s power—you get 200 images from 1978 to 1984—as well as an foreward by Slash, and bite-size musings on Eddie’s transformation of rock music from the best guitar players in the business. To order, or for more info and a preview of the book, see VanHalenStore.com.