This is the amazing story of how Van Halen broke out of the backyard party scene—playing their very first concert on the infamous Sunset Strip!

Their gig at Gazzarri’s on April 4th, 1974 was their first performance in Hollywood. Landing this gig helped catapult the band out of Pasadena’s backyard beer bashes, and thrust them headfirst into Tinseltown! This historic date was a true milestone—their gateway to playing more area clubs on the strip—such as the Starwood and the Whisky—and ultimately being discovered. Here is the story…

“One day, we’re going to be the Kings of Gazzarri’s” The above photo is copyright Edward Przydzial – ECPI

In 1972, a musical trio called Genesis began their world conquest, playing high school gigs, backyard parties, weddings, wet t-shirt contests, and everywhere in between. The group was comprised of Eddie Van Halen on guitar, Alex Van Halen on drums, and Mark Stone on bass. As the band’s popularity grew, they changed their name to Mammoth, and with a repertoire in excess of two hundred songs, became the party band of southern California. One of the regular fixtures at many outdoor gigs was the police, often resorting to bringing in helicopters to break up gigs, as kids from every corner came to catch a show, much to the dismay of the hosting neighborhood.

By 1974 they hired Dave Roth, a singer from the local group Red Ball Jet. They went with Dave’s immediate suggestion to change their name to Van Halen—due in part to the fact that the name Mammoth was already in use by another band-and moved their rehearsals to their new headquarters in the basement of David’s parents’ home. It was Roth’s dream to play the Sunset Strip, and he was very ambitious. He knew that the only way to be seen by somebody important was to play Hollywood. He got the other guys on board, and they tirelessly auditioned for the club circuit.

Finally, Bill Gazzarri, owner of “Gazzarri’s Hollywood A-Go-Go” on Sunset Boulevard in West Hollywood, CA, was the first club owner to give Van Halen a shot after turning them down the first three times they auditioned. Known back then as “The Godfather,” the oft—fedora—endowed Gazzarri was a staunch advocate of hosting unsigned talent.

In this never-seen 1979 letter written by Bill Gazzarri to the Los Angeles Times, Bill wrote that Roth had informed him upon being hired that the band had auditioned at 19 area clubs and were turned down every time. His letter confirms that April 4th, 1974 was their first show there. 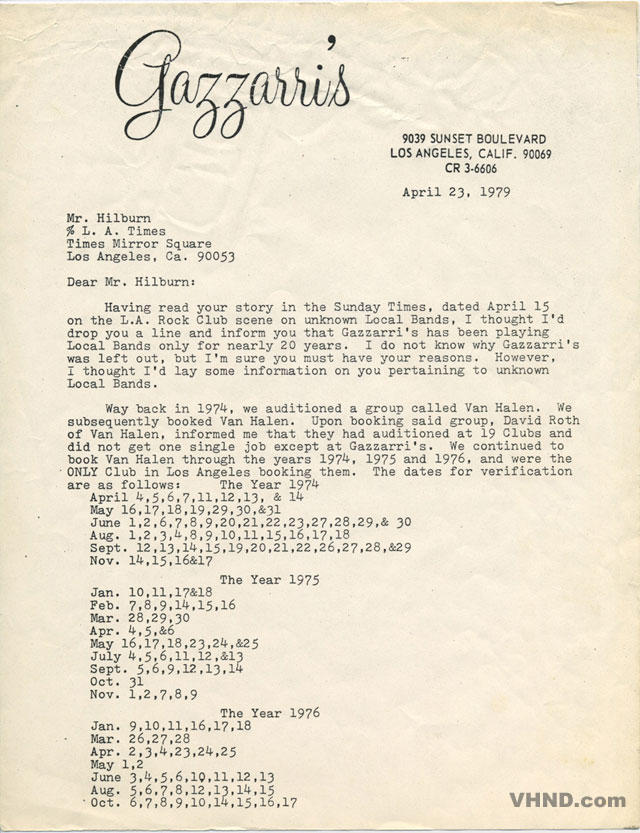 Beginning April 4th, when Eddie was just 18 years old and the other members 20, they scored their first steady gig—a regular spot at Gazzarri’s Teen Dance Club in Hollywood, playing cover songs for over three hours a night. Eddie bought platform shoes for the occasion and nearly broke his ankles. Their sets consisted mostly of cover tunes at first, but they would sneak in originals as often as they could.

Roth honed his stagecraft by emceeing the dance contest between singing songs. His joining the band had opened the door to Hollywood—club owner Bill Gazzarri famously called him “Van,” assuming the band was named after the singer. It was becoming apparent to the Van Halen brothers that they picked the best singer/frontman around. Not only was he oozing with swagger and confidence, he was choreographing stage and lighting moves that made every little lick memorable. The Van Halens handled the music, and he took care of the rest. However, there was one member not as dedicated as the rest-Alex was chosen to ask Mark Stone to leave after a couple years in the band.

The band then found the perfect bassist and background vocalist in Michael Anthony, who was given the job immediately after one audition. “We’re playing dance music for people who would like to party tonight,” Roth chatted up a Pasadena crowd in a 1975 bootleg recording. From his earliest moments onstage, he was riffing on song titles, talking a mile a minute, looking to burn through his awkwardness as fast as possible and become a seasoned stage master. “No sense trying to be high-class and play nonsense shit. We’ll play something maybe you can relate to. At least you can get up and dance, man…find out if that honey you’ve been looking at wants to look back at you.”

With his windblown hair and hairy exposed chest thrust outward, Roth was a fusion of pop icons Farrah Fawcett Majors and Burt Reynolds—but he wasn’t hanging next to Robert Plant on bedroom walls just yet. In 1975 he was still a loose, chatty kid, rattling off stage raps just to hold back the hecklers. He taunted rocker boys to “get mellow and imitate Soul Train,” then laughed when they shouted their disdain for soul music. Nevertheless, while the strong bass lines and Alex’s drums punctuated the California air, the young ones danced boldly.

About Gazzarri’s: Opening in 1963, Gazzari’s was a spawning ground for several unsigned acts including the Byrds, the Walker Brothers, and Buffalo Springfield. Many popular 1980s bands including Metallica, Guns ‘n’ Roses, Warrant, and Motley Crue all cut their teeth there as well. Unfortunately the venue was closed shortly after Gazzari’s death in the early 1990s. The club changed the name to Billboard Live, and then later, the Key Club, but is now shut down. As documented in The Decline and Fall of Western Civilization 2, Gazzari’s was a bawdy go-go scene relic that survived into the 1970s with rock excess and a touch of vaudeville. The best dancer in the crowd won thirty dollars–incentive to copy the moves on Soul Train and American Bandstand and hopefully bump into the girls standing nearby.

Even as the band scored entry-level Hollywood showcase gigs at Gazzari’s—a glamorous position compared to the bowling alleys of Pasadena—they were usually taking home less than a hundred bucks a night, hardly enough for four guys to keep their enterprise rolling.

Van Halen played Gazzari’s basically three times a week on and off for the next three years, cutting their teeth on cover tunes the same way the Beatles and Black Sabbath did during their record-setting residencies at the Star Club in Hamburg, Germany. With a tight rhythm section delivering heavy artillery, a flamboyant lead singer, and a hotshot prodigy guitarist, Van Halen were biding their time until they became stars. Until then, Schlitz Malt Liquor and Camel Filters fueled champagne dreams.

The boys were organized in their dogged way. They drove beat-up jalopies and secondhand vans with crooked wheels and barely enough room to haul gear. They began recording demos, though on their shoestring budget it was difficult. They bartered and scraped together enough cash for sessions at Cherokee Studios and Hound Dog Recording Studios on Colorado Boulevard. Local impresario Rodney Bingenheimer liked the band’s originals at the Golden West Ballroom and recommended them for a booking at the Starwood—a den of ill repute in West Hollywood—with several spaces, including a rock room that held a thousand. Slash from Guns N’ Roses hung out there as a teenager, selling Quaaludes, he told Musician. Unlike the Top 40 bars Van Halen had been playing, the Starwood didn’t want covers—or bands tainted by the stigma of playing Gazzarri’s. From then until the end of 1976 Van Halen straddled the line, appearing at more prestigious gigs at the Starwood while still playing covers on alternating nights for old man Gazzarri.

At that point, older brother Alex handled the band’s booking and management, and for years he would remain a band authority figure. The outgoing Roth played a different kind of leadership role, constantly repackaging the band’s image for the outside world with stage costumes, flyers, and publicity stunts. The music, the image, and the work ethic all flowed naturally from the same quarreling four heads, united for a just cause. 1976 saw Van Halen gaining a larger following, and they began gigging every six weeks at the Whisky a Go Go, and playing almost monthly at the Pasadena Civic Auditorium, occasionally attracting audiences of up to three thousand.

After two years of hustling at Gazzarri’s, Van Halen took a slot on May 9, 1976, opening for the lethal British rock squadron UFO at the Golden West Ballroom in Norwalk. Usually Van Halen were happy to slip a couple originals into the playlist, but that night they made a major decision to perform mostly their own songs. Besides a midset block of songs by Aerosmith, ZZ Top, and Led Zeppelin, they played “On Fire,” “Last Night,” and “Somebody Get Me a Doctor”—plus a flashy guitar solo Eddie had developed called “Eruption,” which showcased his two-handed tapping style.

Some of these early originals would resurface over their first six albums, and bits and pieces would appear in reworked form for another decade. Most of Van Halen’s material was unique, heavy, and ready to go. The band was getting to be ridiculously good. Gigging disco covers, they had honed their background vocals, with Eddie and especially Michael shooting high-pitched harmonies to counter the missing horn section. When they started writing their own songs, those harmonies became a hallmark of the Van Halen package—Michael Anthony earned the nickname “Cannonmouth.”

Their last show at Gazzarri’s was Oct 17th, 1976, ending their two-and-a-half-year run at the club. By then, Van Halen had begun their move towards superstardom, playing the Starwood, the Whisky, the Pasadena Hilton, Walter Mitty’s Rock & Roll Emporium, and more.

At Walter Mitty’s in Pomona, CA, which had a capacity of 300—Van Halen was said have squeezed 1000 people into the place on some nights—the band witnessed a man die from stab wounds during an argument between two bikers about whose bike was faster while the band played “You Really Got Me.” After this particular incident the band decided to move their amplifiers roughly one-and-a-half feet away from the wall so they could hide behind them when fights broke out. The club was reportedly closed a short time later due to an increase in violence.

All the California kids knew about Van Halen by then—the word was out among high schools, guitar stores, and hangouts all over Los Angeles. Then finally, on a rainy weekday night in 1977, again at the Starwood in West Hollywood, Van Halen were discovered for the second and last time.

But that’s another story…