This is an excerpt from the February 2014 issue of Guitar World. For the rest of this story, plus several vintage Van Halen photos and more — including Ozzy Osbourne & Zakk Wylde, the return of Jake E. Lee, Tosin Abasi, Steel Panther, Five Finger Death Punch and John Petrucci’s monthly column — check out the February 2014 issue at VanHalenStore.com.

Home Improvement: Thirty years ago, Eddie Van Halen built his own home studio and took control of his group’s musical direction. The result was 1984, the groundbreaking album that established Van Halen as chart-topping superstars.

When rock music fans first heard Eddie Van Halen’s radical, innovative tapping technique at the end of “Eruption,” many mistakenly thought that they were hearing a synthesizer.

Six years later when Van Halen released their 1984 album, there was absolutely no doubt that a synthesizer was generating the majestic and mysterious sounds that they heard this time around. In fact, the first note of Eddie’s guitar wasn’t heard until two minutes and 10 seconds into the album’s first two songs.

With the album’s initial single “Jump,” Ed proved that he could play keyboards every bit as well as he could play guitar, but even more importantly he also showed the world that he could craft a pop song that was as good as, if not better than, anything else out there at the time.

Van Halen’s use of a synth on “Jump” ushered in a new era of appreciation for the instrument, which previously was associated mostly with new wave bands and electro pioneers like Kraftwerk, Gary Numan and Tangerine Dream. Almost overnight, sales of synthesizers increased exponentially, similar to the revolutionary boost in guitar sales that Van Halen influenced after the first Van Halen album made its debut and fortuitously coinciding with the introduction of the first affordably priced polyphonic synths. Music store keyboard departments were soon filled with the sounds of aspiring musicians playing ham-fisted versions of “Jump,” much the same way that guitar departments were subjected to novices attempting to play “Stairway to Heaven.”

1984 may have been released 30 years ago, but Ed Van Halen still fondly remembers many fine details of the album’s creation. The fact that Ed was able to complete this achievement during a tumultuous period that ultimately led to the band’s initial lineup breaking apart is somewhat miraculous, eclipsed only by the album’s phenomenal success.

GUITAR WORLD: What inspired you to build your own studio at your home?

I used to have a back room in my house where I set up a little studio with a Tascam four-track recorder to demo songs. I really wanted to record demos that sounded more professional than what I was doing. I used to spend so much time getting sounds and writing. I have a tape of me playing in the living room at five A.M., and you can hear Valerie [Bertinelli, Ed’s ex-wife] come in and yell that she’s heard enough of that song. That was another reason why I built the studio.

The bottom line is that I wanted more control. I was always butting heads with [producer] Ted Templeman about what makes a good record. My philosophy has always been that I would rather bomb with my own music than make it with other people’s music. Ted felt that if you re-do a proven hit, you’re already halfway there. I didn’t want to be halfway there with someone else’s stuff. Diver Down was a turning point for me, because half of it was cover tunes. I was working on a great song with this Minimoog riff that ended up being used on “Dancing in the Street.” It was going to be a completely different song. I envisioned it being more like a Peter Gabriel song instead of what it turned out to be, but when Ted heard it he decided it would be great for “Dancing in the Street.”

How did 5150 go from being just a demo studio to a fully equipped pro facility?

When we started work on 1984, I wanted to show Ted that we could make a great record without any cover tunes and do it our way. Donn [Landee] and I proceeded to figure out how to build a recording studio. I did not initially set out to build a full-blown studio. I just wanted a better place to put my music together so I could show it to the guys. I never imagined that it would turn into what it did until we started building it.

You really were overflowing with creativity during the period between Diver Down and the middle of 1984. During that time you also recorded “Beat It” with Michael Jackson, the Star Fleet Project with Brian May, The Seduction of Gina and The Wild Life soundtracks, and you and Donn produced a single for Dweezil Zappa.

I had a lot of music lying around, because all I did was write. I remember, we were rehearsing for the Diver Down tour at Zoetrope Studios when Frank Zappa called me and asked if I would produce a single for his son Dweezil. I also did the Brian May Star Fleet Project then and the session with Michael Jackson. Val asked me to write some music for a TV movie she was doing. Until you mentioned it, I had forgotten that I had recorded The Wild Life soundtrack back then. Now I remember that Donn wasn’t very happy, because he had to mix it on his own. I had to leave to go on the tour that we were doing with AC/DC in Europe that summer. 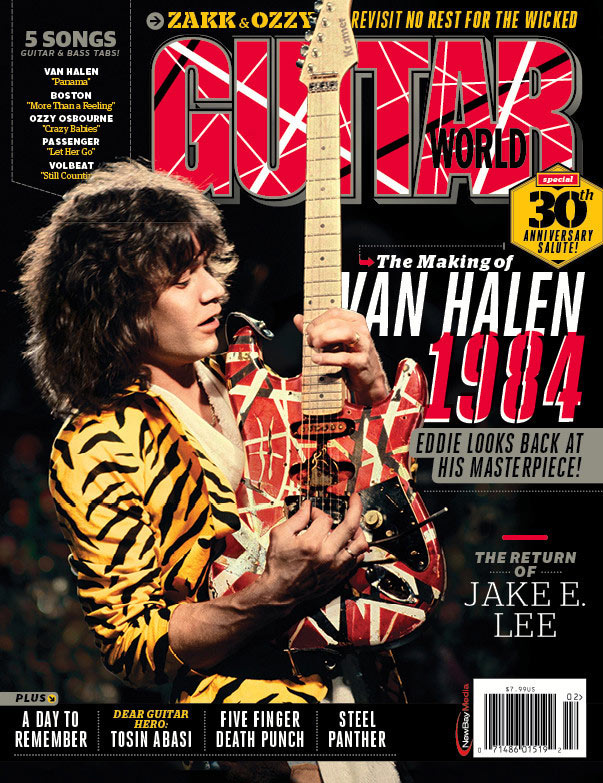