You are here: Home / 1979 / My Introduction To The Mighty Van Halen

There are moments of clarity in every person’s life that are ingrained in one’s memory so completely as to almost be imprinted on the DNA.

Most people, for example, can tell you exactly where they were and what they were doing when world-altering events occurred.

Personally, I find that this phenomenon also happens with music. I have always tended to mark specific instances and periods of life based on certain songs and when I first heard them.

But nothing quite prepared me for that day in the summer of 1978 when my musical theory received relativity.

Living in Southern California at the time, the local hard rock radio stations of the day had been playing a trio of songs from an L.A. band that had just released its debut record. There was something about those three songs that seemed to force my hand — as if drawn by a tractor beam — toward the stereo’s volume dial, where a quick right turn would raise things to a more enjoyable level.

The songs in question were “Ain’t Talkin’ ’Bout Love,” “You Really Got Me” and “Runnin’ With the Devil.” The band was Van Halen — and life as I knew it was about to change.

I remember clearly the day my brother and I drove down to the local record store to purchase the cassette tape of this much-buzzed-about new band. Being the sensible older brother, I hedged my bets by allowing him to buy it — figuring that if I ended up not really liking the rest of it, at least I wouldn’t have risked my own hard-earned money on what was still a largely unknown entity. It turned out to be the best $5 I never spent. (Don’t worry. I would later plop down money, most willingly, for the vinyl album and remastered CD.)

Leaving the record store, we pushed the tape in the car stereo, turned up the volume and headed for home. The short drive from Foothill Boulevard up Lowell Avenue in La Crescenta only used up one song, and we were just pulling into the garage as opening track “Runnin’ With the Devil” came to its fiery conclusion.

And that’s when the future officially arrived — and it was named “Eruption.”

The plan was to pop the tape out and continue listening inside the house, but the second song had just started and neither one of us could even remotely fathom reaching for the eject button.

To be quite honest, we weren’t exactly sure what we were hearing during that initial listen. A torrent of notes exploded out of the left speaker at a dizzying rate as we looked at each other in slack-jawed amazement and wondered aloud whether what we heard was accomplished on synthesizer or guitar.

And while I didn’t know exactly what I was hearing, I recognized that the music landscape as I knew it was changing before my very ears.

As it turned out, what we were experiencing was a 1-minute-and-42-second explosion of jam that changed guitar playing forever and signaled the arrival of a new six-string sheriff: Eddie Van Halen.

Later that summer, our family moved to Utah where, in a shocking surprise, the mention of Van Halen resulted in nothing more than dumbfounded stares — as the band had yet to break on Salt Lake City radio stations. However, once I started attending college in the fall, I was back in familiar territory, as Van Halen was a big favorite among those on our dorm floor, since most of my new acquaintances were students from out of state. Well, all of them that is except a longtime friend from California, Mat Yeates.

It was late in our freshman year (March 1979) that we heard a radio ad for a Van Halen concert at Utah State University in Logan — about two hours north of Provo, where we were going to school. But we were undeterred. I remember Mat and I being elected to drive up and procure the tickets — for our group of eight or so who wanted to attend. On the day before tickets were to go on sale, Mat and I drove up to Logan to camp out for the best seats. When we got there, we were first in line. Well, basically, we were the entire line — as nobody else was there. We sat there for a couple hours — no doubt talking about Mat’s love for the band Legs Diamond, some band he was always pimping as the next big thing — before somebody showed up at the ticket office, which is when they informed us that there had been a problem at the ticket printer’s, and that they had been forced to postpone all ticket sales.

The tickets did eventually go on sale a few days later, and we scored some sweet seats on the seventh row on the floor. We were pumped.

Van Halen II was released on March 23 — so we had eight days to familiarize ourselves with the new material before the show. I can still picture walking into the quaint locally owned record store — Remember those? — near campus and hearing “Light Up the Sky” for the first time playing over the loudspeakers as the shop owner was spinning the new disc.

March 31 finally arrived and the weather was terrible. I recall making the couple hours drive to the show through a torrential downpour.

The support act that night was a band called the Granati Brothers. [Read the story that the Granati Brothers wrote about their experiences opening for Van Halen]. Never heard of them? Neither had we. They jumped out on stage in their poodle-boy hairdos. That’s pretty much all I remember about their set — although a couple years back I did run across a couple of news stories out of Pennsylvania (Motto: Home of the Granatis) where they reminisced about how they had remained friends with the Van Halens for years after that tour. But I digress.

I have never stood on the tarmac behind a 747 when it takes off, but it can’t be unlike the experience of seeing Van Halen open a concert. The sheer power of “Light Up the Sky” erupting from the amplifiers as Van Halen took the stage was an experience to behold. What a complete rush! It was a show unlike anything I had ever seen prior to that. There was the technical wizardry of Eddie Van Halen on guitar, offset by the exaggerated macho posing, high-pitched wails and animated song intros of frontman David Lee Roth. There was action all over the stage, augmented by Michael Anthony pounding on his bass and Alex Van Halen on drums (he even set the big gong behind him on fire at the end of the show). It was powerful. It was funny. It was completely over the top. And I loved every minute of it.

The best analogy I can come up with to describe the experience is to compare it to the pivotal scene in the movie “Back to the Future” where everyone is at the “Enchantment Under the Sea” dance and, as a member of the band, Marty McFly starts riffing on Chuck Berry before falling down on the stage and playing a cacophony of lead guitar notes, leaving everyone in the audience with stunned looks on their faces. (Is it a coincidence that earlier in the film, when Marty plays music from the future to frighten his father into asking his mother out, that the tape is labeled “Van Halen”? I think not.) Van Halen was ahead of its time — both musically and from a stage-show standpoint.

One recollection I wish I had, but can’t pull out of the memory banks, was whether or not Eddie played his infamous “Shark” guitar that night. He was using it on select songs throughout that tour, so chances are good that he used it at our show as well. The “Shark” guitar is an Ibanez Explorer that Eddie — a noted tinkerer in search of the perfect “brown sound” tone, as has been evidenced over the years with all his developments in guitar-related products and even his own line of guitars — took a chain saw to, drastically altering its appearance and sound. The cut-out chunk gave the guitar a slight Jaws-esque appearance, which led to its moniker. Of course, I didn’t begin becoming familiar with his guitar collection until several years down the road, so it would not have resonated with me that evening. Still, that particular guitar has always fascinated me — it just looks cool — and it nags at me that I might have seen it played and just not realized it at the time.

There is a bit of a mystery involving that Logan show. To this day, the Logan concert — Van Halen’s first live appearance in Utah — does not show up on any of the band’s archived tour lists. I heard a rumor several years back, supposedly emanating from a former member of the band’s road crew from back then, that due to some bet, for some reason Alex Van Halen said the band would never acknowledge that tour date. (I can’t vouch for the source, but it is strange that the date remains unlisted.)

On a ridiculous note, a few years ago I read a review of that show written in the Utah State University student newspaper. The reviewer waxed poetic about how this great new band had graced the USU stage and was sure to be the next big thing in rock music. Unfortunately, he was talking about the Granati Brothers. He completely dismissed Van Halen. (Rock critics … sigh … what do they know?) I actually felt sorry for the sap that wrote that review. There was a future Rock and Roll Hall of Fame act on the bill that night, not to mention arguably the greatest guitarist of his generation, and the poor guy totally missed it. A complete whiff. Not to worry, I’m guessing that writer went on to a successful career forecasting futures on Wall Street.

Well, of one thing I’m certain. The show did happen. And I’ve got the ticket stub and pictures to prove it. Not to mention, 30-plus years reflecting on the memories of that one night.

The photos, incidentally, were shot by a friend of mine who was taking a photography class on campus at the time. We went to the university darkroom and printed these pictures up, and I have held on to them all these years. Several of them capture the raw power and energy of a young band that would become the biggest band in America within the next five years. (Mitch Hancock, wherever you are these days — I salute you!)

A little over six months later, Mat Yeates and I, and two other friends, were on the doorstep of Eddie and Alex Van Halen’s childhood home in Pasadena — on the day of the band’s first headline appearance at the Great Western Forum — having a chat with their father, Jan Van Halen (a delightful character). Ah, but that’s a story for another day.

That’s the tale of my introduction to Van Halen … what’s yours?

Note: Included below is the setlist from the Logan show. Also, some videos that have popped up on YouTube in the last couple years taken from the tour-opening show in Fresno, Calif., on March 25, 1979 — just six days before the Logan show. This footage is the closest thing available to what I witnessed that first Saturday night Logan. [View the 1979 footage from Fresno here]! 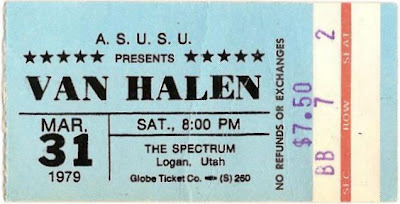