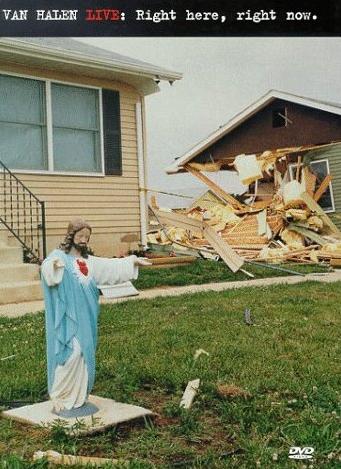 As we all know, Van Halen parted ways with their flamboyant original frontman David Lee Roth in 1985 and almost immediately regrouped with the already rising superstar Sammy Hagar firmly at the helm. “Van Hagar’s” 1986 debut album, 5150, was a massive success, becoming the band’s first #1 album on the Billboard charts, and spawning three hit singles.

A wildly successful tour soon followed, which you can still witness on the excellent Live Without A Net concert DVD. The video was originally released in 1987 on VHS and was finally transferred to DVD in 2004. Even if you are not the biggest fan of the whole Van Hagar era, you’ve got to admire the band’s bodacious performance on that DVD.

Live: Right Here, Right Now was filmed over the course of two nights, 14 & 15 May, 1992, in Fresno, California during the band’s For Unlawful Carnal Knowledge Tour, otherwise known as the F.U.C.K. Tour. This was the second (and I’ll refrain from saying “and final”) concert video to come out of the Van Hagar camp, but it certainly wasn’t their best. I’ll lay the brunt of the blame squarely in the lap of the brilliant director, Mitchell Sinoway, who obviously thought it would look just super to constantly intertwine footage from both shows throughout each and every song.

I guess if seeing each of the band members change clothes and instruments 50 times during the same songs is not a distraction for you, then you will just love this fine MTV video that Mr. Sinoway has thrown together for you. It’s one thing to combine footage from different shows, just not throughout the same damn song – constantly! This obviously led to some audio/video synchronization problems too, and it didn’t exactly provide for a great live feel.

I thought for sure that Van Halen would make things right after completing their hugely successful 2007-2008 world tour that reunited them with David Lee Roth. I attended one of the shows on that tour, and it was a monster. One classic song after another from each of the first six incredible Van Halen albums, and the boys were all playing like kids again.

One of them actually was a kid, seeing that Eddie’s teenage son Wolfgang took over bass duties for the unceremoniously dismissed Michael Anthony. They reportedly filmed a few shows during the tour, but, incredulously, I have not heard a peep about any new release yet. The Right Here, Right Now setlist is a big disappointment, to say the least. Where the CD version features 24 songs, the DVD only includes 16 – and most of the best songs were omitted. The entire For Unlawful Carnal Knowledge album is performed, along with a couple of OU8I2 and Roth-era songs thrown in for good measure. You also get the Sammy Hagar solo number “Eagles Fly,” which he performs alone on acoustic guitar.

This would not necessarily be a bad thing had F.U.C.K. been one of their best albums, but it was probably the worst of the first three Van Hagar albums, and was definitely one of the worst Van Halen albums. The album certainly has it’s share of cool tunes like “Poundcake,” which made for a great opening number, as well as “Runaround” and “Right Now,” but it should not have been called upon to carry an entire concert DVD on it’s frail shoulders. I mean “Pleasure Dome” and “Spanked,” but no “Ain’t Talkin’ ‘Bout Love” or “Panama?” Come On.

You do get extended solo spots from all involved, starting with Michael Anthony’s infamous “Ultra Bass” solo, which is so over-the-top-ridiculous that it is a hoot to watch. Once. Although Mikey is actually a pretty decent bassist, as you can witness on the current Chickenfoot tour, I doubt you’ll have too many bass aficionados glued to the screen admiring his virtuosity on this one, like you will during Eddie’s “316” solo spot.

Along with the gorgeous “316” song itself, Eddie’s solo also incorporates several other of his key solo pieces and signature riffs, including “Cathedral,” the “Mean Street” intro, and of course “Eruption.” You also get the see Alex’s drum riser elevate about 30 feet in the air at the end of his powerhouse 8-minute drum solo. Papa Van Halen must be proud.

For the most part, the DVD transfer turned out pretty good. The picture is much darker and more grainy than what you are probably used to with the more recently filmed DVDs, but it still looks very clean and colorful. The longer shots of the entire stage, and those showing the crowd fared the worst.

Aside from the ridiculous video editing, the next biggest disappointment was the lack of any 5.1 surround track. Dolby Digital 2.0 stereo is all you get here, but at least it was a very good one. There were no special features included on this DVD.

Van Halen were (are?) one of the greatest live rock bands ever, whether they were fronted by Diamond Dave, Sammy, or Gary Cherone – well, maybe not Gary Cherone. But this mediocre release certainly does not do them justice. Let’s hope they make up for it with a new, kick-ass, 2008 tour DVD sooner than later.