(Updated June 27th, 2018) It was nine years ago today that Edward and Janie wed.

Eddie Van Halen married his publicist Janie Liszewski at his Studio City home on Saturday night. (Scroll down for many more photos from the wedding). The couple said their vows under an altar of white roses constructed by Mark’s Garden.

Prior to the ceremony, 100 guests, including Valerie Bertinelli, enjoyed cocktails on the lawn and music provided by  the Sonus Quartet.

Eddie and Janie dated for three years before tying the knot. They plan to honeymoon in New York and the Netherlands. All wedding photos below are by Flynet pictures, courtesy of Celebrity Bride Guide: An “I Love You” sign directed guests to the wedding of Eddie Van Halen and Janie Liszewski in Studio City on June 27, 2009. The wedding took place at Eddie’s seven-acre home as the sun was setting. The ceremony was on the lawn and a poolside reception followed. Guests watched the couple say their vows under an altar of white roses constructed by Mark’s Garden. 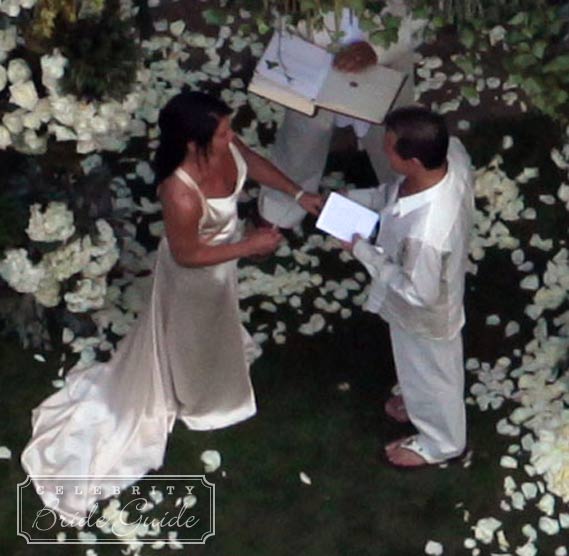 Eddie and Janie dated for three years before getting married. Janie is Eddie’s publicist. The bride and groom posed for wedding photos with their extended family before guests arrived. Eddie dressed casually in a button down shirt and Mark Nason flip flops. Eddie helped his new wife with her Hanna Hartnell wedding dress after posing for wedding pictures.