Van Halen’s “Hot For Teacher” was released this DAY in 1984!

The song about being lustfully attracted to your teacher is quintessential Van Halen, and appealed to a new generation of Van Halen fans who could relate to the message and were enthralled by the video, which would go down as one of the most popular fixtures of the early years of MTV. Enjoy our lists of 10 little known “fun facts” about the song, and 10 more about the music video.

1) It is the last single and music video released by Van Halen before the departure of David Lee Roth in 1985.

2) The single peaked on the U.S. charts at #56. With its huge popularity over the last 30 years, its surprising it didn’t chart a lot higher! It often appears on “Best Of” lists for songs, guitar solos, and music videos. 4) For the layered effect at the beginning, Alex Van Halen strung together four bass drums. The rest of it he played using two. It is a great example of double bass drumming.

5) The ending of this song comes from a demo song from the band’s club days, entitled “Voodoo Queen.”

6) To simulate the quiet interludes live (recorded using the neck pickup on the V turned down low in the studio), Eddie used a Roland echo unit with the volume turned down, which he activated from his pedal board.

8) There’s live performance footage of this song from Castle Donington, England, during the Aug  18th, 1984 Monsters of Rock date.

9) The TV show Glee covered this song on the 11/15/11 episode. Great to see the song appealing to the kids, but we’ll stick to the Van Halen version!

10) An Oakland University student was suspended after writing an essay titled ‘Hot for Teacher.’ He later sued the school for 2.2 million. Full Story. 1) The video for this song was directed by Pete Angelus and David Lee Roth and produced by Jerry Kramer. 2) The choreographed dancing scene featuring the band in maroon wedding style tuxedos was reportedly dubbed “Dave and the Pips” by the members of Van Halen.

3) This inspired the catch phrases “I don’t feel tardy” and “Sit down, Waldo.” Waldo was the young man in the video who didn’t fit in. The voice of Waldo was done by none other than the late Phil Hartman of Saturday Night Live fame.

4) There’s not one, but TWO models who play the teacher in the video. One was Donna Rupert (first runner-up in the 1981 Miss Canada pageant), and also Norwegian model, Lillian Muller. (Many websites list Wayne Gretzky’s wife, Janet Jones, as playing the teacher, but that’s untrue). 5) More than 80 people were selected for the various roles in this video (taken from a tryout of several hundred hopefuls), which was filmed over a four-day period at John Marshall High School in Los Angeles, CA. Interestingly, the school had been closed prior to Van Halen’s filming the video. The city didn’t have the funds to reopen the school, so the band contributed an undisclosed amount (on top of the money they paid to rent the school for filming) to the city to help reopen it.

6) The children chosen to portray Van Halen as youths were: Beto Lovato (Alex), Bill Bookmeyer (Dave), Brian Hitchcock (Eddie), and Yano Anaya (Michael), who went on to play Grover Dill in the movie “Christmas Story.” According to legend, by the third day of filming, the four actors were walking and talking just like their respective counterparts. Anaya wore one of Michael’s earrings for the video, Bookmeyer lost the pair of sunglasses given to him by Dave for use in the video, and after the shoot was over, Edward gifted Hitchcock with one of his own guitars. 7) In one classroom scene where the teacher is dancing on the desk, a black board is featured with the numbers “20-9-8-19-25-12-15-8”. Each of these numbers corresponds to a letter of the alphabet. If you read the encoded word from right to left, you’ll notice it spells “HOLY SHIT.” This is the only known instance of such “hidden” gimmicks in a Van Halen video.

8) The hot rod’s burnout at the end of the video was totally unplanned. The car’s owner was not too pleased, to say the least. The hot rod, named as “Tom’s Tub Two” was put up for auction in the fall of 2000.

9) Tipper Gore, wife of then-Sen. Al Gore, was shocked by the ‘Hot for Teacher’ video. “The images frightened my children,” she said. “They frightened me!” By May 1985, Gore would form the Parents Music Resource Center, which lobbied the recording industry to create a ratings system apprising buyers of explicit content. But when the PMRC released its list of the “Filthy Fifteen,” it included songs by Madonna, AC/DC and Sheena Easton, but not Van Halen.

10) The band Escape The Fate made a video for their song “Situations” which is a shameless ripoff of the “Hot For Teacher” video. Watch it here. 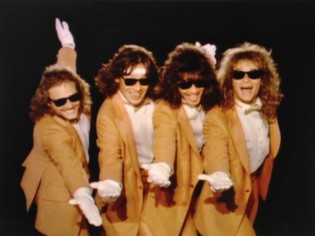 David Cook adds “Hot For Teacher” to his live set

Free Shipping on the Complete Set of the NEW EVH Mini Guitars!