Watch this sexy fan-made video (above) for one of the 10 absolutely perfect tracks from Van Halen II! 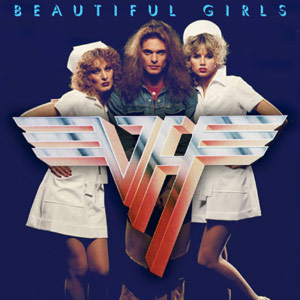 Back in the seventies and eighties, most aspiring bands enjoyed the honorable right of passage of playing at strip-clubs and wet T-shirt contests. Alas, this privilege has now passed on to that instrument-deficient breed of plankton known as the DJ, but while it lasted it was one of the best gig an up-and-coming musician could hope to get (especially if you manage to get lucky after the show).

“It was one of the reasons why we played,” Alex recently explained. “It’s just life. It’s seen everything, enjoying it, and taking it a little bit further than it should. You had to do the wet T-shirt contest during the fourth set. You had to get the girls lubed up, and then they would get looser and start to hike their skirts up.”

Beyond good timing, it’s important to know what songs will bring out the woman’s inhibitions. While Van Halen had plenty of songs that could fill the bill, they went one better by writing their own ode to ogling called “Bring on the Girls” with a bump-and-grind riff, raunchy rhythm and lascivious lyrics guaranteed to get those sweater puppies shaking.

Due to record label pressure, the band toned down the lyrics slightly from the 1977 demo version and renamed the song “Beautiful Girls” when they recorded it for Van Halen II. But as anyone who has ever patronized the Seventh Veil or Spearmint Rhino can attest, the song still gets heavy rotation whenever some young lovely named Candy (or was that Cindy? Vicky?) takes the stage. And don’t forget to tip your waitress.