After the exhausting Fair Warning tour, the band planned to take a break from one another in early 1982. But that plan changed when David Lee Roth had the idea to record and release a single – just to keep the band’s name in circulation.

Roth wanted to cover the early sixties Motown classic “Dancing in the Streets,” but that idea was put on hold when Eddie suggested covering a different sixties classic, Roy Orbison’s “(Oh) Pretty Woman” instead.

During the rehearsal for “(Oh) Pretty Woman,” Eddie and Dave got into an argument. Eddie wanted to know if Dave had learned all the lyrics, and Dave pressed Eddie about whether he’d learned all the music. The pair got so caught up in the spat that neither noticed they’d left out part of the song when recording. When the mistake was discovered, the band decided to leave it as it was. The song was recorded in one day at Sunset Sound Recorders in Hollywood, CA, and released with the b-side of “Happy Trails,” before the band would record the rest of the Diver Down album. 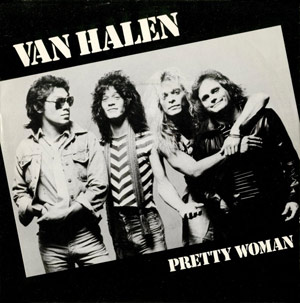 When the single was initially released on February 6th, 1982, it didn’t include the word “(Oh)” in the title, though this was corrected in later releases.

Somewhat unexpectedly, the song was a big hit, reaching number 12 on the singles chart. Eddie liked it’s riff, but much to his chagrin, the song became their biggest hit, despite not having a true guitar solo. “It shows you how much guitar solos mean to people,” he later complained.

Due to the success of the single, Warner Brothers suddenly demanded an album to back up it up, pretty much forcing the band to hurriedly record. This pressure may be the biggest reason why more than one-third of the Diver Down album is made up of cover songs.

The band rushed to Amigo Studios to make Diver Down, the first album recorded outside the hallowed rooms of Sunset Sound Recorders. Warner Bros. owned Amigo, so they could make it available on short notice, and it was cheaper for them, only costing about $46,000. This would be their only album ever recorded at Amigo Studios, as Eddie would go on to build his 5150 Studios the next year.

Van Halen’s original demo for the song (which remains uncirculated) was recorded in Malibu, CA, in a 16-track studio owned by the brother of Daryl Dragon (one-half of the 1970s singing duo the Captain and Tennille).