UPDATED 4/5/19 with several fantastic photos of Ed’s Frankenstein guitar, and two videos, below:

Eddie Van Halen announced on social media, “My 1978 touring rig and original “Frankenstein” guitar are on display in New York at the Metropolitan Museum of Art‘s “Play It Loud” Instruments of Rock & Roll exhibit. The exhibit opens to the public on April 8th.”

As previously reported on VHND, this is the first major art museum exhibition dedicated to the instruments of rock & roll, which we think is very cool! The exhibition will be on display at the Met from April 8th through October 1st, 2019.

In the exhibit’s Guitar Gods section, Eddie Van Halen’s 1975 “Frankenstein” red, black, and white guitar is in a glass display, where you can fully see both the front and back of the Fender that he took to with a chisel and a hammer to cut holes to make room for a Gibson pickup, and later painted—twice. Note: VHND can confirm that this is indeed Edward’s ORIGINAL Frankenstein guitar. This is not one of the official replicas, which was what the Smithsonian had on display in 2015.

In an interview clip playing at the exhibit, Van Halen says, “Ninety percent of the things that I do on guitar, if I had taken lessons and learned to play by the book, I would not play at all the way I do…Crossing a Gibson with a Fender was out of necessity, because there was no guitar on the market that did what I wanted.”

In another room, Eddie’s 1978 rig is on display, along with rigs of Jimmy Page of Led Zeppelin fame, Keith Richards of The Rolling Stones, and Tom Morello of Rage Against the Machine, each accompanied by video clips. Eddie Van Halen, a self-taught guitarist, created a new vocabulary on his instrument through an array of jaw-dropping techniques and electronic effects. Two-handed tapping, in which both hands sound the strings from the fingerboard, allowed him to produce fluid phrases at dizzying speeds. Van Halen’s use of “dive bombing,” depressing and releasing the vibrato bar to create dramatic descents and ascents in pitch, drove innovations in guitar design such as the locking vibrato system and ushered in new standards in virtuosic hard- rock and metal performance.

Displayed here is a reconstruction of his rig as it appeared onstage in 1978, the year the band Van Halen released their eponymous debut album. It includes amplifier speaker cabinets and tube-powered amplifiers (heads), effects units, and a reconstructed pedalboard featuring effect pedals identical to the originals, alongside a replica of the 1978 version of the “Frankenstein” guitar. Most dramatically, Van Halen’s rig included the casing of a World War II–era practice bomb that was repurposed as a rack for housing his Univox tape echo units. This 2018 Super ’78 Eruption guitar is an exact replica of the original configuration of Eddie Van Halen’s “Frankenstein” guitar, which he constructed himself from various spare guitar parts. His original decoration used white spray paint for the body with black intersecting stripes. After this was widely copied, Van Halen repainted the guitar red with white-and-black stripes, its now-iconic configuration. Aptly nicknamed “Frankenstein,” this guitar was pieced together by Eddie Van Halen from modified factory seconds and mismatched odd-lot parts, then spray-painted. It represents an effort to combine some of the most desirable elements of Gibson and Fender guitars into a single instrument that was not commercially available at the time. Van Halen was continually striving to achieve the ultimate guitar for tone, playability, dependability, and functionality. The unique guitar embodies not only his groundbreaking and unorthodox playing style but also his ingenuity in design and engineering. One of the most recognizable guitars of all time, it spawned legions of copies from other manufacturers and inspired generations of fans to design their own instruments.

Again, this is indeed Edward’s ORIGINAL Frankenstein guitar. Not a replica.

Enjoy the fantastic photos below. Most were donated from Travis Heying. He attended the patron’s viewing this week, for a special sneak peak. Here’s what he said to VHND about being there:

“It takes your breath away when you walk into that room. There are several partitions to the exhibit, but there’s one room, maybe 25 x 25, that is… amazing. There are famous guitars on the walls all around, but there are four suspended in glass in the middle. Franky. Hendrix’s V, Clapton’s Blackie and Page’s “#1”. They’re all facing each other. It’s a religious experience.” 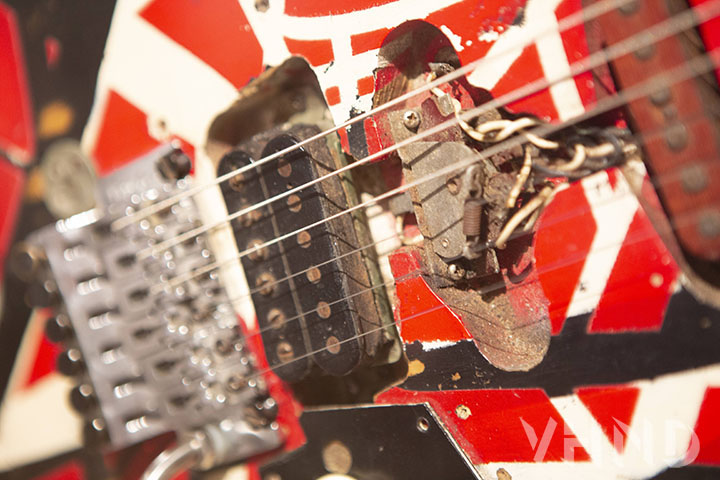 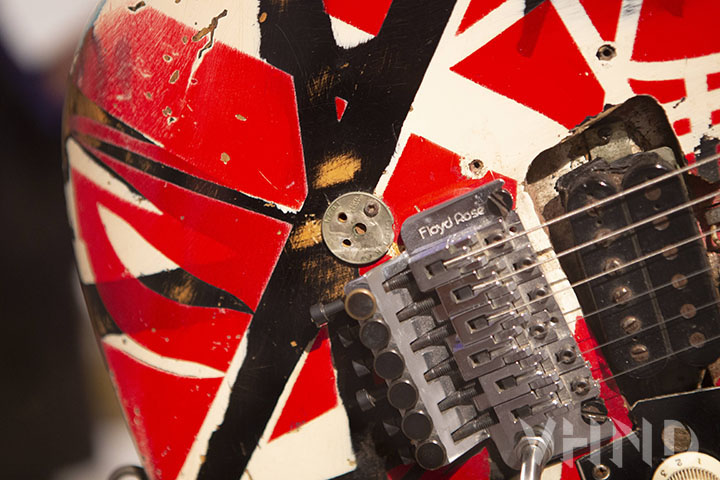 Play It Loud: Instruments of Rock and Roll

Musicians and music lovers will want to check out Play It Loud: Instruments of Rock & Roll, in person, opening at the Metropolitan Museum of Art on April 8th. To celebrate Eddie Van Halen’s inclusion into The Metropolitan Museum of Art’s “Play It Loud” exhibit, EVH has come out with a commemorative Exhibit Tee. They’ve got a limited supply in stock. Get yours now!