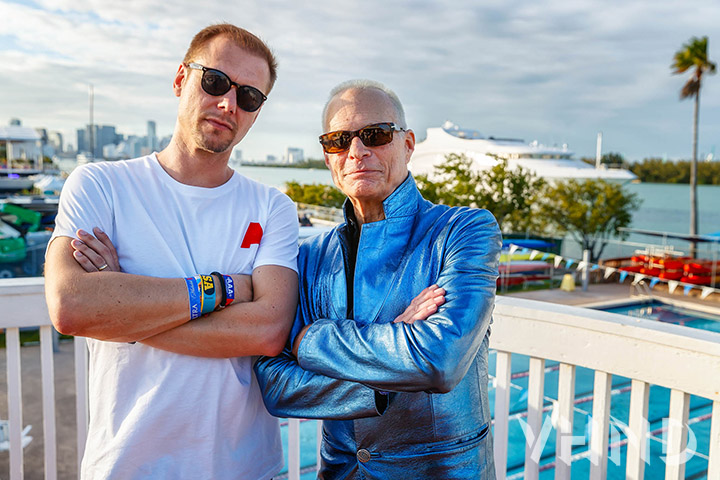 UPDATED with 2 new videos, and exclusive photos for VHND, straight from Dave:

When it comes to David Lee Roth fans know to always expect the unexpected. This weekend he delivered not one but two of those unexpected surprises. Although neither was with Van Halen one was with van Buuren, as in Dutch trance DJ Armin van Buuren.

Roth made a surprise appearance at the Ultra Music Festival in Miami Saturday night. Ultra Music Festival is an annual outdoor electronic music festival that takes place during March in Miami. It was during van Buuren’s set where the two performed a remix of the Van Halen #1 single from 1984, “Jump”.

Roth and van Buuren spoke with Rolling Stone from an L.A. studio a week before their performance to talk about the ‘Jump’ remix and their upcoming live performance. Van Buuren said he was introduced to the idea of remixing the Van Halen classic when a friend of his sent him the stems of the original recording.

“I’m like, ‘Yeah, hell yeah,’” the producer told Rolling Stone. “I knew the song already as a kid. I think I was 6 years old when the track was a Number One hit everywhere. I was just eager to have the stems, because I always thought, ‘What if you could have the energy of that song from 1982 and transfer it to 2019?’”

After remixing the track van Buuren sent the track to Van Halen. “I just sent it [to the Van Halen camp] and didn’t hear anything for two, three weeks,” said van Buuren. “And then all of a sudden, I got a call from Raymond van Vliet from Cloud 9 [Music], and he couldn’t even breathe. He’s like, ‘They love it, and they possibly even want to come to your show.’ I’m like, ‘What?’ ‘David is a massive dance-music fan.’ I’m like, ‘You’re kidding me. really?’ I thought that was so cool, so that’s how we came together.”

Roth reiterated his passion for dance music by tracing back to the days when Van Halen would stop in New York City during the band’s tours. It was there he would listen to and record dance music.

“Let’s go back a bit. I go back to the day when the key to your hotel room came with a little plastic tag that had your number on it,” said Roth. “And it was a big ritual for when we would land in my rock band to play in New York City, because I would make sure to give one of the road managers my key to go upstairs and make sure to change the 60-minute cassette tape and flip it, because I was recording WKTU, Stereo 92.” New episode of ‘The Roth Show’:

Roth also released a brand new episode of his podcast “The Roth Show”, his first since August of 2016. In the episode titled “Diamond Dave Goes Ultra” Roth talks more about his Miami appearance with van Buuren, the “Jump” remix along with the backstory behind his passion for dance music. As for what he talks about for the rest of the 46:41 long episode? That all is up for your own personal interpretation. This is, after all, from the very complex yet always entertaining mind of David Lee Roth.