Over the last three years, the VHND has kept up with three young musicians who’ve been performing excellent Van Halen covers, but always having to do them long distance, as two of them live in Québec, and one lives in Australia. This summer, however, they all got together for the first time — to perform several gigs as the Jacob Deraps Band! Watch their latest Van Halen cover, “Ice Cream Man,” above. We spoke to Jacob again, and he wants to say the following to all the VHND’ers out there:

This is the first time me and Josh were together and played together in person after 3 years of making these cover videos, Josh flew all the way from Australia and stayed 2 months in Québec, the first day he was here, we went to see Toto and actually played “Rosanna” with them at the soundcheck, here’s the video on YouTube: Rosanna with Toto.

This particular show with the “Ice Cream Man” cover was Montreal Jazz Festival, which is the biggest Jazz Festival in the world, this was our third show together and we were playing on the blues Bell stage in front of thousands of people, it was packed and everyone was having a blast.

Note that “Ice Cream Man” was the last song of our show, and we had to cut the intro, to end on time with the event. It captures a great moment and already makes me feel nostalgic about this whole summer trip with Josh coming to Québec from Australia, we had such a blast! Hope you enjoy it!

I am currently planning to do it again next summer, we will start working on new videos in the meantime, Josh was also vlogging the whole trip and I will also be working on my album this year.

I’m so glad we got together, we all have same musical taste and style. Plus, me and Josh get along so well we became brothers, and William has been my friend since the beginning of high school, we have a great and a long trip ahead of us!

Jacob and Josh have been featured on VHND previously for their incredible covers of “Loss of Control” “On Fire“ “5150” “Outta Love Again” & “Runnin’ with the Devil.” Jacob is sponsored by Ernie Ball Music Man and Germino Amplification.

PHOTOS: All photos by Nick Kozub. See his Facebook. 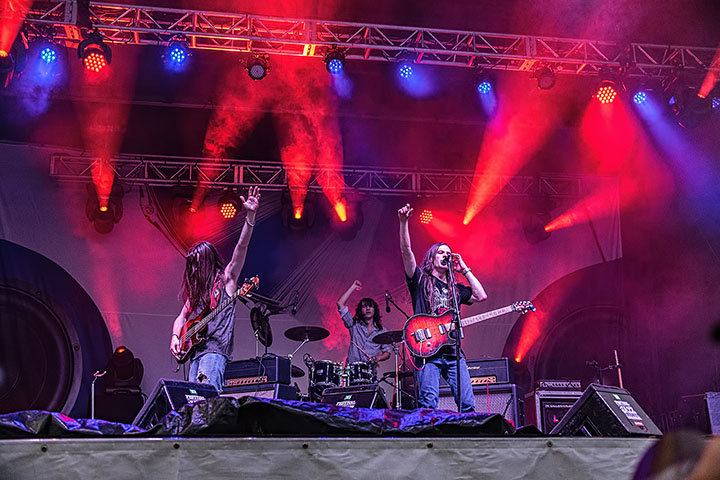