You are here: Home / News / 30 Years Ago: Sammy Hagar Releases ‘I Never Said Goodbye’ with Eddie Van Halen on Bass One year after the success of 5150, Sammy Hagar momentarily stepped outside of Van Halen to fulfill his contract with Geffen — he owed them one album as part of a deal made between Geffen and Warner Brothers when the vocalist joined Van Halen.

To fulfill his obligation, Hagar kicked around the idea of recording a live album with various musicians and made up of some of his favorite songs. But that idea was abandoned when he decided to release a studio album instead, which would have none other than Eddie Van Halen on bass guitar. The album would be produced by Eddie Van Halen and himself. This album would mark the second time Eddie played bass on record, the first being when he emerged in early 1987 just to play bass on “Winner Takes It All,” a toss-off song written by Giorgio Moroder and sung by Sammy Hagar for the soundtrack of Over the Top — a corny remake of Rocky, starring Sylvester Stallone.

Sammy Hagar was later retitled I Never Said Goodbye by the winning entry of MTV’s Sammy Hagar’s Name My Album contest, designed to juice interest in the album. Kim Musgrove’s entry, “I Never Said Goodbye”, was picked by Sammy and entitled her and a friend to hang out with the band for a day at 5150 in March of 1988. The first printing of the album did not include the title, of course, though later runs did. Musgrove’s name was supposed to appear in the credits of the named run, but for unknown reasons it didn’t. Releasing the album would have him going head-to-head with David Lee Roth as a solo act, even if that wasn’t his main intention. Sales-wise, Hagar’s solos albums were selling strong, but not quite what Roth’s were. (V.O.A. went platinum, but only several months after it was announced he joined Van Halen, and this 1987 self-titled album reached Gold, compared to all three of Roth’s eighties releases going Platinum — ‘Eat ‘Em And Smile even reaching double Platinum).

The album was recorded at A&M Studios in Los Angles, CA, and overdubs were done at One Studios in Los Angeles and The Record Plant in Sausalito, CA. Now known as Plant Studios, the studio opened on Halloween 1972. 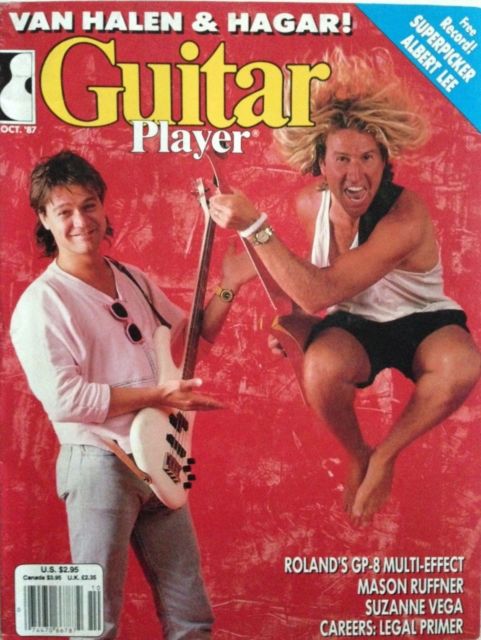 Edward played a Steinberger bass on the entire album, and contributed a short tapped lead solo section to the song “Eagles Fly.” The bass lines were reputedly played through two separately located acoustic amplifier stacks owned by Blue Cheer. Los Tres Gusanos skins-pounder David Lauser laid down most of the drum tracks. Omar Hakim provided drum overdubs on “Back into You” and “Hands and Knees.” Keyboards were played by Jesse Harms. Michael Anthony added background vocals to this album but was not credited.

Sammy used a Kramer Baretta with a single volume knob (Edward Van Halen style) for most of the guitar parts through Ed’s 100-watt Marshall Super Lead amp and his effects rig. He also used a red Sammy Hagar-model Hamer, outfitted with a Kahler bridge on “Hands and Knees” (this guitar was used to record all the guitar parts on VOA). A 1953 Gibson Hawaiian guitar tuned to open E was used to play lap slide on “Standin’ at the Same Old Crossroads,” the solo in “Boys Night Out,” and a few background licks on “Privacy.” Incidentally, this same guitar was used on “Bad Motor Scooter” from Montrose.

The video for “Hands and Knees” featured an appearance by Edward, Alex, and Michael, as well as the Brain Box (see “Brain Box” entry). Portions of the video for “Give to Live” were filmed at the Rose Bowl in Pasasdena, CA. The only other video made for this album was for “Eagles Fly.”

What had seemed like a concession to Geffen later looked like a smart move on Hagar’s part — the leverage of a separate identity outside Van Halen — one that he would always have. “It’s hard to say exactly why I’d want to make another one because I get the chance to do anything I want with Van Halen,” Sammy said. “But there might be a time when I’ve got something that isn’t quite right for the band, and then if I get a few more songs together, I’ll have the makings of another solo album.”

The songs “Give to Live” and “Eagles Fly” were also performed live by Van Halen together with Hagar. “Give to Live” also topped the Mainstream Rock Tracks chart in 1987, a first for Hagar as a solo artist. The former song was included on the album Live: Right Here, Right Now, the latter on the optional bonus disk as well as on the “Jump” single.
“Boys’ Night Out” was performed live on the American TV show Late Night with David Letterman.