Last November, Eddie Van Halen reached out to Jeff Babicz, who built Eddie’s iconic Steinberger 5150 striped GL2T, 30 years prior, and asked him to restore the guitar. Today Jeff posted a picture of the fully restored guitar, shown above.

The best part of this news is that, when Eddie asked him to restore the historic guitar, Jeff says that Ed mentioned, “This guitar is as important to the music as the songs themselves...I want to play this guitar again, people want to see this guitar.” Van Halen enthusiasts might know that Edward used this guitar to record just 5 songs: “Get Up,” “Summer Nights,” “Pleasure Dome,” “Fire In The Hole,” and “Me Wise Magic.” Is Eddie planning on performing any of those songs live, in the future?

The feel-good anthem “Summer Nights” was the first song Ed, Al, and Mike jammed to with Sammy Hagar. Ed recorded the track on a Steinberger GL-2T decorated it with trademark black-and-white stripes on a red background. The guitar was also used on “Get Up” from the same record, (5150).

This was also the guitar used on the first song that David Lee Roth recorded with the band when he reunited with them in 1996 (“Me Wise Magic”). “This is me (Jeff Babicz) just after I built Eddie Van Halen’s “5150” guitar. Eddie famously played this guitar during Van Halen’s “Live Without A Net” tour…around 1986-87. Eddie used this very guitar to record thesongs: Get Up, Summer Nights, Pleasure Dome, Fire In The Hole, and Me Wise Magic.” 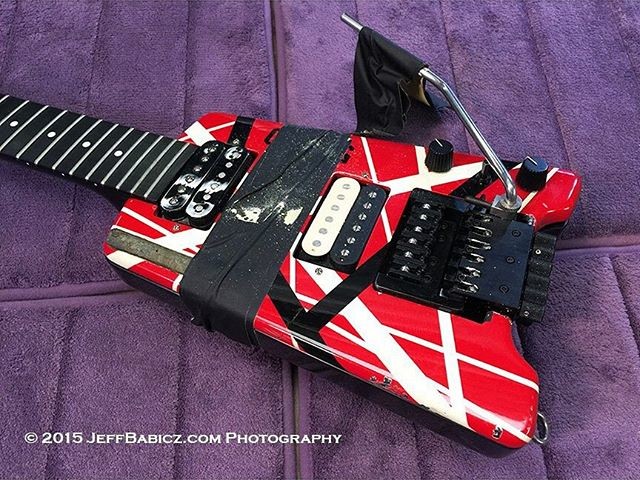 “So I get a call from Eddie Van Halen, who asked me if i’m interested in restoring some of his guitars (of course I said yes!). Here is one of the guitars he sent me: His iconic Steinberger 5150 striped GL2T, serial #3340. I built this guitar for him in November 1985…almost 30 years ago to the day!. When discussing the restoration approach with Eddie, he says “this guitar is as important to the music as the songs themselves…I want to play this guitar again, people want to see this guitar.” I will be doing a re-fret, installing vintage EMG pickups, and rebuilding the Steinberger TransTrem tremolo unit for him. Stay tuned.” 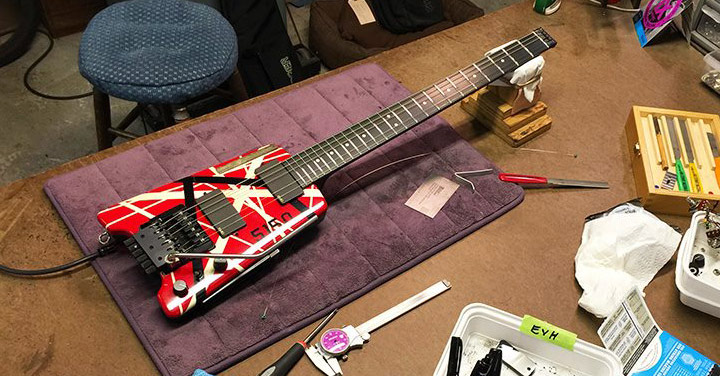 “Just another day at the office…NOT!
Here I’m doing the final set-up on Eddie Van Halen’s 5150 Steinberger guitar. I restored this guitar for Eddie, which included a re-fret, TransTrem rebuild, new pickups and more…”

For more info on this guitar, see JeffBabicz.com.