In a recent video, Sammy Hagar goes off on Eddie Van Halen, specifically in response to Eddie’s claim in the new Billboard interview that he had to constantly show Michael Anthony what to play on bass.

In his two-minute video rant below, Sammy says, “For Eddie to say he had to show him what to play and had to teach him all those songs, that is the biggest line of bullshit I’ve ever heard my life. I was in that band for 11 years, there was never a video camera involved of Eddie showing [Anthony] what to play. Eddie would tell him what to play once in a while, say ‘No Mike, don’t play to that many notes, just stay on one note, so that I could fuck up and nobody would know it.’”

Sammy goes on to say, “Fuck you, Eddie Van Halen for saying that about Mikey. You’re a liar.”

However, in Sammy’s own biography, RED, Sammy said things quite differently: 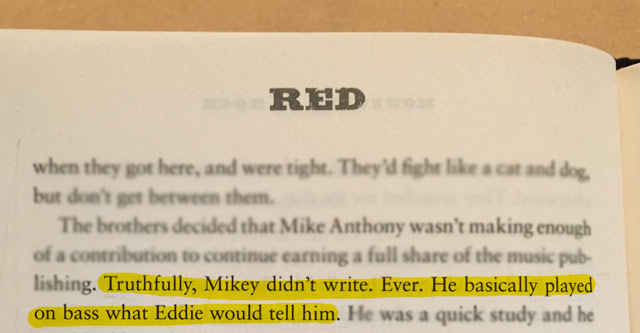 “Truthfully, Mikey didn’t write. Ever. He basically played on bass what Eddie would tell him. He was a quick study…”

We can all agree that Michael Anthony is a hell of a bass player, and that his background vocals are legendary. But the question is which one of Sammy’s statements is his truth? We’ll leave it up to you guys to decide.