You are here: Home / 2004 / “Dime was an original, he deserves the original” —Eddie Van Halen on Dimebag Darrell The great “Dimebag” Darrell Abbott was tragically shot dead onstage while performing on Dec. 8th, 2004 with Damageplan at the Alrosa Villa in Columbus, Ohio.

This is the story of why Dimebag’s last words were “Van Halen!”, and how he was buried with the guitar that inspired him most — Eddie Van Halen’s yellow and black striped Charvel hybrid guitar featured on the back cover of Van Halen II.

Dimebag’s death was a horrible moment for anyone attached to the electric guitar in any capacity. Dimebag had been a member of Pantera for over twenty years with his brother Vinnie Paul, and had racked up an impressive portfolio of gold and platinum albums while continually speaking his adulation of Eddie Van Halen. During the lean era of the 1990s, Pantera kept concerts filled with faithful hard rock fans eager for guitar solos. Eddie Van Halen appeared at Dimebag’s memorial service. He held his cell phone to the mic and played a voicemail Dimebag had left him days earlier. “Thank you so much, man for the most awesome, uplifting, euphoric, spiritual rock and roll extravaganza ever,” Dimebag’s recorded message said.

Edward said, “I’m here for the same reason as everyone else, to give some love back…” and also “…this guy was full of life. He lived and breathed rock ‘n’ roll…”.

In a lasting sign of deep respect, Eddie buried the black-and-yellow tape-striped guitar pictured on the back cover of Van Halen II with Darrell.

What was the story of Eddie Van Halen bringing the guitar to Dimebag’s funeral?

I remember talking with Vinnie, trying to decide what guitar to bury him with. Three hours later, Eddie called to see if he could do anything for us and for Dime. We’d met him just a few weeks earlier for the first time, and Dime was ready to cut him a $30,000 check that night for one of his striped guitars, but Eddie told him he’d do one special for him. So I asked him if he’d stripe up a guitar for Darrell. He said, “One of the red, white and black ones?” And I said, “No — Darrell always said that the yellow and black was your toughest guitar!”

When he came for the funeral, he brought his original yellow and black from 1979. He said, “An original should have an original.”

We were walking down the hallway of the funeral parlor, me, Eddie and John “Bushman,” who had been out with Damageplan as a tech — he’s the one who dragged Vinnie off the drum stand and threw himself on top of him to protect him. We got to the room where Dime was, and you could see [Abbott’s] feet through the doorway. Eddie said, “I can’t go in there, I can’t see him like that — I want to remember him like he was that night I met him.” I said, “That’s okay, Eddie — we’ll take it to him,” so John and I went in and placed it with him. In an interview with Metal Monthly, Rita explained further: “We had just seen Van Halen in Midland, Texas, a few weeks earlier, and that was the first time Dime ever got to meet Eddie. They hung out before and after the show. Dime even got to play Eddie’s rig at soundcheck. He was like a kid in a candy store — the way his eyes were lit up. He told me later in the limo — which Van Halen provided — ‘How cool is that? Anyway, he leaned over and looked me right in the eyes and said, “If I died tonight, it wouldn’t matter, ’cause I’ve done everything now, I’ve met Eddie Van Halen!” and he had the biggest smile on his face… he was so happy!

“When Ed came in at the viewing, he had the guitar, but it wasn’t the guitar we expected… he told Vinnie and I that “Dime was an original and only an original deserves the original!” He popped open the case and there it was… his original ’79 still with the rusted set of strings on it! It was so amazing!!! I took it in to Dime and I said, “See, baby, you didn’t get a replica! You got THE one,” and I gave him a kiss on the forehead and place it in there with him… Ed was awesome and I thank him still!” Van Halen’s impact on Dimebag’s playing is unmistakable. The “vibe” of early Van Halen is by far the most recognizable influence in Dimebag’s playing. From the grooving rhythms played like leads of their own, to the tone, to the phrasing in his lead playing, Dimebag took the inspiration of Edward Van Halen and forged his own identity.

Pieces such as “Eruption” and “Spanish Fly” were favorites of Dimebag, who would play them in his unaccompanied guitar solos back in Pantera’s early club days.

Dime has been noted as being Texas’ “Van Halen clone,” the local hotshot who could play all of the most impressive licks of his hero. Further, the brotherly bond of the Van Halen brothers (Eddie on guitar and Alex on drums) was mirrored in Pantera (Vinnie on drums and Dime on guitar).

To truly understand Dimebag’s playing, it is crucial to absorb the “Van Halen” feel, as well as the techniques and attention to tone that were such a part of the early Van Halen experience. 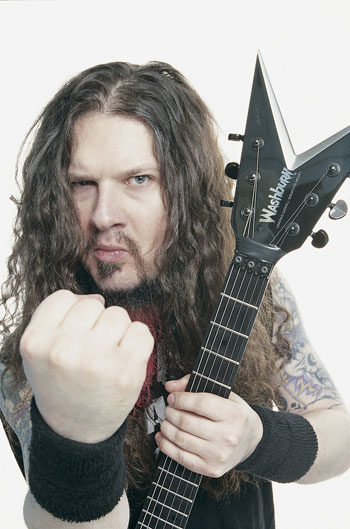 Van Halen’s impact is further felt as the words “Van Halen!” were actually Dimebag’s last words spoken before he was tragically murdered. “Van Halen” was something Dime would say to his brother Vinnie before a live performance to inspire them both to play a fun, lively, rocking show.

“We were very saddened and angered to hear of the shooting that took place in Columbus, OH last week that took the life of a friend and fellow musician, Dimebag Darrell Abbott.

“It was only a few weeks ago that Dime and Vinnie Paul joined us backstage to do some Jack shots while we were in Wichita on the last leg of the Van Halen summer tour.

“It flat-out sucks that something like this could happen to someone who just wanted to get up on stage and play guitar.

“Our sincerest condolences to Dime’s wife Rita, his brother Vinnie and all of the Abbott family. Darrell will be missed.”