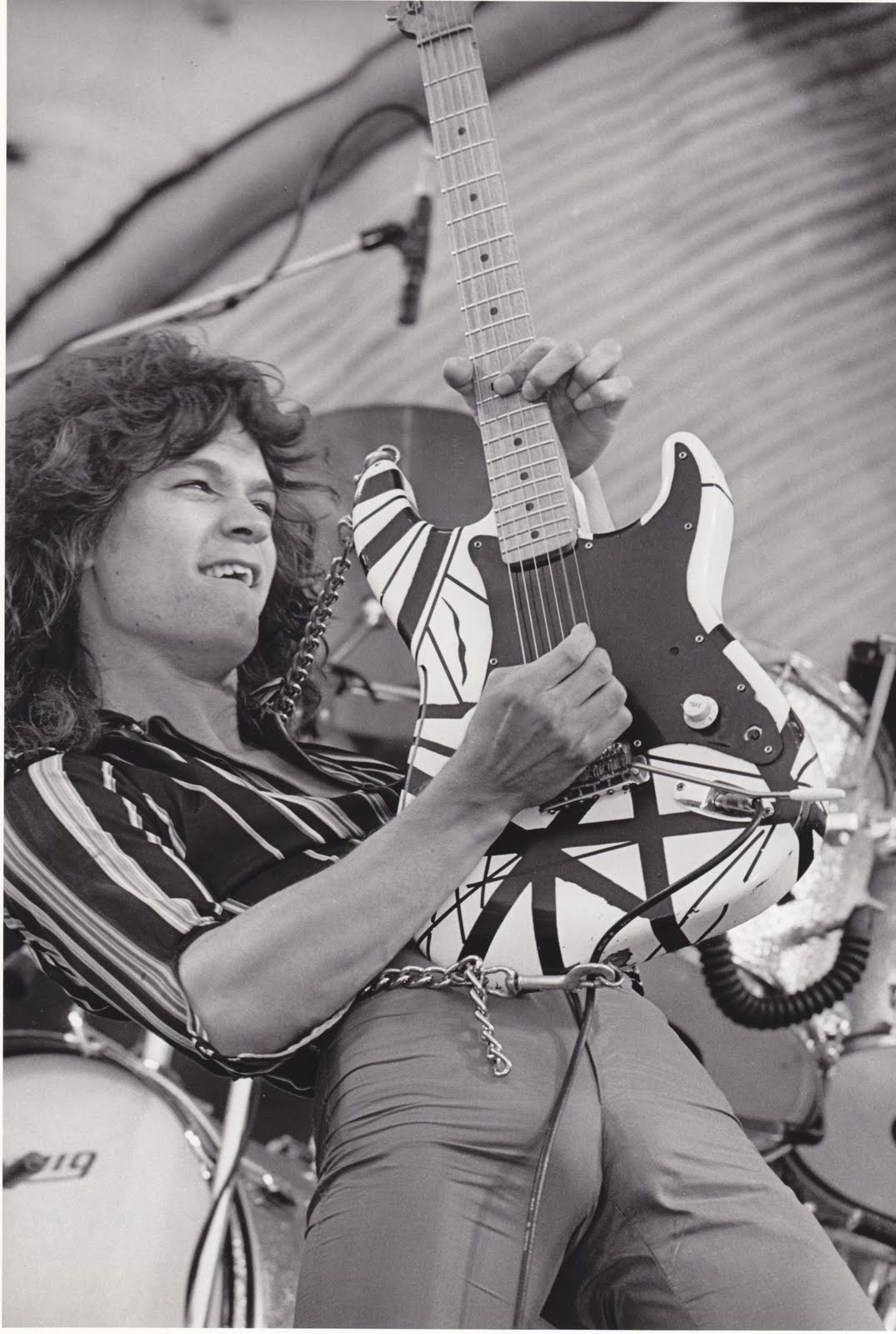 With the release of 1978’s self-titled Van Halen album, 23-year-old Eddie Van Halen rewrote the rules of rock guitar. His sheer speed, unusual note choices, inspired finger tapping and whammy work, and fiery tone inspired guitarists everywhere. His impact was especially felt among crotch-rock guitarists in big-name bands, who saw their dreams of becoming “the next Jimi Hendrix” blown away in the 1:42 it took to listen to “Eruption.” Within months, it was virtually impossible to go into a music store or listen to a garage band without hearing some guitarist doing a rough approximation of Eddie’s groundbreaking instrumental. While the band’s rise seemed meteoric, the musicians had, in fact, spent years perfecting their act.

Eddie Van Halen and his older brother Alex were born and raised in Holland. Their father, Jan Van Halen, was an accomplished clarinetist in big band and classical styles. At age six, Eddie began taking classical piano lessons from a strict Russian master who’d slap his knuckles with a ruler whenever he made a mistake.

In 1967, the family moved to Pasadena, California, where the brothers discovered rock and roll. “I wasn’t into it at all back in Holland,” Eddie told me. “Wasn’t much of a scene going on. When we came here, I saw Hendrix and Cream around ’68, and I said, ‘Fuck the piano! I don’t want to sit down. I want to stand up and be crazy!’ The main influence for me, believe it or not, was Eric Clapton. I mean, I know I don’t sound like him, but I know every fuckin’ solo he ever played, note-for-note, still to this day. I used to sit down and learn that stuff note-for-note off the record. The live stuff – like ‘Spoonful,’ ‘I’m So Glad’ live – all that stuff. But when we first came to the U.S., I started playing drums, and my brother was taking guitar lessons – flamenco, nylon strings, stuff like that. While I was out doing my paper route so I could keep paying the payments for my drum set, he’d be playing my drums. And eventually he got better. I mean, he could play ‘Wipe Out,’ and I couldn’t. So I said, ‘Keep the drums. I’ll play a guitar.’ From there on, we’ve always played together.” 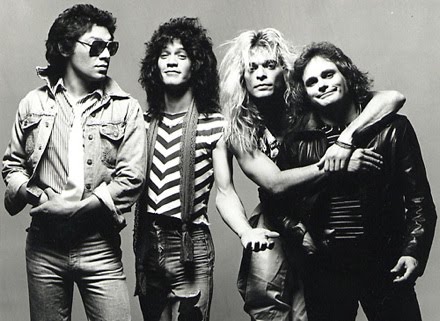 The brothers named their first band Mammoth: “It used to just be me and Al and a different bass player. I used to lead sing, and I couldn’t stand that shit! I’d rather just play. Dave Lee Roth was in another local band, and we used to rent his P.A. We said, ‘Fuck! It’s much cheaper if we just get him in the band!’ So we got Dave in the band, and then we were playing this gig with a group called Snake – they opened for us. We were all tripped out, because the bass player was singing. That was Michael Anthony, and we asked him to join. So we all just kind of hooked together. We all stuck with each other, because by the time we graduated from high school, everyone else had to go to school to be a lawyer or whatever.”

Discovering another band had a claim on the name Mammoth, they considered calling themselves Rat Salade before wisely settling on Van Halen. For the next three years, the musicians worked the Pasadena/Santa Barbara bar circuit, with Eddie playing a ’58 Fender Stratocaster. “We played everywhere and anywhere,” Eddie recalled, “from backyard parties to places the size of your bathrooms to you name it. And we did it all without a manager, without an agent, without a record company. I guess the main thing that really got us going was the Pasadena Civic. We’d print up flyers and stuff thousands of them in high school lockers. And the first time we played there, we drew maybe 900 people. The last time we did, which was in 1977, we drew 3,300 people at four or five bucks a head. It was about the only place where we could play our own music. We also used to play Gazzaris and other places where you had to do the Top-40 grind.”

The Debut Album Heard Around the World 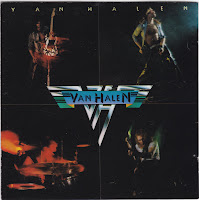 In 1978, I’d been an editor at Guitar Player, then America’s only guitar magazine, for about a week when a review copy of the Van Halen album arrived. Our chief editor, Don Menn, put the album on his turntable, and we all stood around and listened to “Eruption.” “Is that a keyboard or a guitar?” Don asked as Eddie began tapping the frets – at that time, the technique was so rare, we weren’t even sure it was played on a guitar. Adding to the mystery was the fact that although Eddie was depicted holding a Stratocaster, the guitar on the record sounded unlike any Fender we’d ever heard.
Soon afterward, on July 23, 1978, I attended a Bill Graham Day on the Green concert in Oakland, California, where AC/DC and Van Halen were opening for Pat Travers, Foreigner, and Aerosmith. I was there to interview Travers, a second-tier guitarist who, it turned out, was too distracted by groupies to do an interview. Stressed about coming back to the magazine empty-handed, I began shooting basketball at a small court Bill Graham had set up backstage for musicians. A lean, muscular young man about my age wandered over and said, “Hey, man, can I shoot with you?”

We played one-on-one for a while and then stopped to cool down. “What band are you in?” he asked.

“I’m an editor from Guitar Player magazine. I came here to interview Pat Travers, but he blew me off.”

“Pat Travers blew you off? I can’t fucking believe that! Why don’t you interview me? Nobody has ever wanted to interview me.”

Whoa! We sat down at courtside and Eddie Van Halen gave me what he refers to as his first major interview. Coincidentally, it was also my first important rock interview. 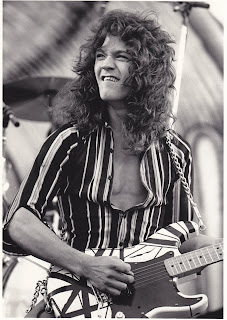 “Tell me about your guitar,” I began, referring to the distinctive white and black-striped guitar he’d just used onstage. “It’s a copy of a Strat,” Eddie responded. “It’s not a Fender. It’s by a company called Charvel. You know, I bought a body from them for 50 bucks and a neck for 80 bucks, slapped it together, put an old Gibson pickup in it, and it’s my main guitar. Painted it up, you know, with stripes and stuff. I just didn’t like the fact of having the standard rock-star setup – you know, a brand-new Les Paul and a Marshall. I was really into vibrato, so the reason I started dickin’ around that way is I wanted a Gibson-type of sound, but with a Strat vibrato. So I stuck a humbucking pickup in a Strat, and it worked okay, but it didn’t get good enough tone because Fenders are kind of cheap wood – they’re made out of alder or something. So then I found out about Charvel, which makes guitar necks and bodies out of ash. But the main reason I made it was to have something that no one else had. You know, I wanted it to be my guitar, an extension of myself. I hate store-bought, off-the-rack guitars. They don’t do what I want them to do, which is fuckin’ kick ass and scream!”

The first Van Halen album, Eddie told me, took three weeks to record – one week for the instruments and two weeks for the vocals. “We went into the studio one day with Ted, and we all just played live and laid down like 40 songs. And out of those 40 we picked ten and wrote one in the studio for the record. So we’ve got plenty of songs. The album is very live with no overdubs – that’s the magic of Ted Templeman. I’d say out of the ten songs on the record, I overdubbed the solo in two or three songs. One of them’s doubled in “Ice Cream Man” and “Jamie’s Cryin’.” All the rest are live! I used the same equipment I use live, the one guitar, soloed during the rhythm track, and Al just played one set of drums [laughs]. And Mike, you know. And Dave stood in the booth and sang a lot of lead vocals at the same time. The only thing we did overdub was the backing vocals, because you can’t play in the same room and sing with the amps – otherwise it will bleed on the mikes. The music, I’d say, took a week, including “Jamie’s Cryin’,” which we wrote in the studio – I had the basic riffs to the song.” 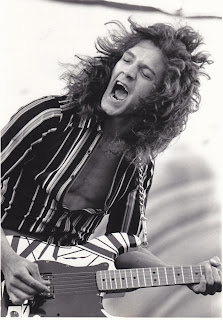 Amazingly, the album’s standout track – one of the most important guitar solos in rock history – was included as an afterthought. “My guitar solo, ‘Eruption,’ wasn’t really planned to be on the record,” Eddie explained. “Me and Al were dickin’ around rehearsing for a show we had to do at the Whiskey, so I was warming up, you know, practicing my solo, and Ted walks in. He goes, ‘Hey, what’s that?’ I go, ‘That’s a little solo thing I do live.’ He goes, ‘Hey, it’s great. Put it on the record.’” Another great track, “Ain’t Talkin’ ’Bout Love,” featured Eddie soloing on a rented Coral Electric Sitar.
Asked to describe the difference between the album and a concert, Van Halen responded, “Well, between that record and the shows we’re doing now, I’d say none. [Laughs.] Because we were jumping around and drinking a beer and getting crazy in the studio too. There’s a vibe on the record, I think, because a lot of bands, they keep hacking it out and doing so many overdubs and double-tracking and shit like that, it doesn’t sound real. And then a lot of bands can’t pull it off live because they overdubbed so much stuff in the studio that it either doesn’t sound the same, or they’re standing there pushing buttons to get their tape machines working right or something. So we kept it real live, and the next record will be very much the same.”

Jas asks that you please help support his blog and independent music journalism by making a donation via the Paypal button at the top of his blog. Visit his blog to do so!