WoodyTone.com has what seems to be the first review of the new EVH Frankenstein Humbucker: 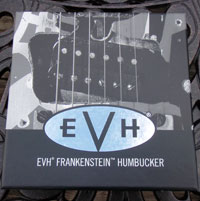 If you’re a fan of Edward Van Halen, ask yourself this question: How much money would you pay for a pickup that EVH personally designed with Seymour Duncan?

Bear in mind that good humbuckers can cost anywhere from $40-$50 made by single-person boutique shops to $75-ish for a Duncan or DiMarizio, to around $150 or so for a Duncan Custom Shop wind.

A higher-end stomp box costs anywhere from $150 to $200 on up. Even cables can cost that much now.

So what would you pay?

How about $140? That’s what I paid for the EVH humbucker through the Van Halen Store (which is the lowest price I’ve found, not to mention that it seems to be the only place that actually has it in stock)! And, pretending for a moment that there isn’t a recession, after installing that pickup and hearing it with my own ears, it’s easily worth at least twice that much – to me, anyway, for what it did to my tone.

In a word, the Frankenstein pickup sounds great. Awesome. It’s the best pickup I’ve ever heard.

Why do I say that? I’ll do my best to explain it. Notes are clear and big. The chords in each note are clear (and big). So I guess it sounds “vintage” – or rather, those are properties of good PAF-style pickups. But the Frankie pickup also sounds F-ing great distorted. Clear, great mids and upper mids, no boominess, no harshness, nothing bad anywhere. In fact, it sounded so good I didn’t even adjust it (height). Just kept playing.

And yes, it made the guitar I stuck it in sound much more EVH-like. 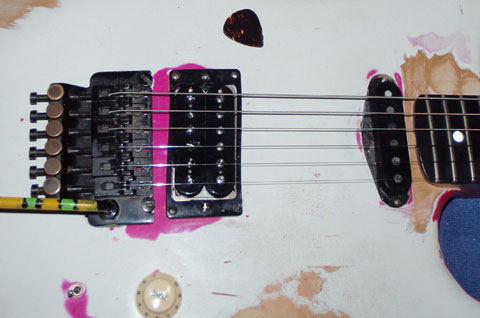 Guitar specs: homemade super Strat, alder body, maple neck with hard ebony fingerboard, original Floyd Rose bridge and nut, one 500K volume pot connected to a two-way switch that can be switched to a single-coil in the neck.

I’ve stuck with this body – which is about half unpainted, so it breathes – through the years because it just sounds great. Always has. I’ve thought about getting a hard ash body like Frankie supposedly has, but hey, it’s wood: You never know how a piece will sound. The same-shaped bodies from the same manufacturer cut from the same wood lot might sound totally different.

So rather than take a chance on a new piece of wood, I’ll stick with this one. I can get EVH-like sounds from this guitar, so it works for me.

The pickup I had in it was a Seymour Duncan Screamin’ Demon, George Lynch’s first signature pickup. Before I took that pickup out and stuck the Frankie in, I played the guitar through my plexi clone for a while – longer than I planned on because it sounded so good.

The Screamin’ Demon is very similar to Duncan’s ‘59 Model PAF-style pickup, which lots of people like for getting the EVH sound. Here’s what the Duncan website says about the Screamin’ Demon: “Moderate output, P.A.F.-style with added ‘growl.’ This pickup was designed in the Custom Shop for guitar legend George Lynch. It has the big open sound of our ‘59 Model with a little less bite and a little more growl. The tone is big, percussive with a defined treble response that doesn’t get harsh. It uses one row of allen screws and one row of standard slotted screws for a unique ‘airy’ sound.”

After playing for a while, I was kind of bummed. I didn’t think there was much chance that the Frankie humbucker, which I paid $140 for, would sound significantly better than the Demon. Nevertheless, I dutifully headed down to the basement to swap pickups.

That done, I returned to the plexi, plugged in and started playing – and was simply blown away.

I can’t say the Frankie pickup sounded 100% better or 50% better or whatever. All I can say is it sounded fuller (not necessarily fatter) than the Screamin’ Demon, clearer and basically gave me a woody. I was not driving a semi at that point.

The best way to say it is, It sounded like I always wished my guitar would sound like.

Here are the publicly-available specs on the EVH Frankenstein pickup:

> Magnet: Degaussed Alnico 2 [degaussed means making the magnet less strong, which means “sweeter,” “mellower,” more even, depending who you talk to]
> Wire: Poly
> DCR: ~ 14K [some people have reported a DC resistance in the high 13s]

Here they are for the Screamin’ Demon:

Here are the specs for the Seymour Duncan ‘78 Model, formerly known as the Duncan EVH but never endorsed by Edward:

After some reading on the subject over the years, and a good recent education by the guys on the Seymour Duncan forum, it seems like:

a) Alnico 2 (or II) magnets accentuate the mids and upper mids, both of which are key for the EVH sound. This may be because the bass, in particular, and treble are weaker with an A2 mag compared to other magnets.

b) Alnico 5 (or V) magnets accentuate the highs and lows, both of which are tight, but thus is a little scooped in the mids. Has better “bite” than an A2.

c) Some people swear by an A5 for the Van Halen sound, and some swear by an A2. Don’t think I’d swear one way or the other, but right now I’m in the latter camp. And apparently EVH likes an A2 magnet too.

Please bear in mind the following:

1.  I am not a pickup expert. I’ve been playing guitar 30 years and have read and talked to enough people that I’m comfortable about my pickup knowledge, but I’ll never be one who obsesses over DC resistance or who regularly shells out $50+ to try new pickups.

2.  Every guitar sounds different. So obviously a pickup that sounds good in one guitar won’t necessarily sound good in another, and vice versa.

3.  The Frankenstein pickup was designed for the $25,000 Frankenstein replica guitar, which allegedly has a northern ash body. Northern ash is heavy, but the replicas are supposedly light weight, which could mean hyper-aged (dried) northern ash or swamp ash or alder. The Frankie also has a Floyd Rose. So if your super Strat has super-dense hard ash and vintage trem, you may not get what you’re looking for out of this pickup. Similarly, if you have a 24 3/4-inch scale length guitar (vs. the Frankie’s Strat-like 25 1/2-inch scale), this pickup might not be your cup of tea.

4.  I have not yet played this pickup in a band situation, but with good mids and upper-mids – and the fact that it was designed by “a working musician” (hah!) – I’m not too worried about it.

Last but not least, the above is my first impression of the pickup. I can hardly imagine feeling anything but better about this pickup the more I play it, but you never know.

I also really want to try the Frankie pickup in my Les Paul (since the this pickup is NOT trem-spaced), but buying another one will have to wait. I think.