The 1995 tour was jokingly dubbed the “Ambulance” Tour by Eddie because of the hip and neck injuries sustained by himself and brother Alex.

The band added a new element to their stage show on this tour: the Jumbotron. Initially Alex’s idea, this was the band’s first time touring with a video production. The Jumbotron was a giant screen, similar to a television set, located above Alex. This was only the second time the setup had been used in arenas. Barbara Streisand was the first to use it in this manner. A six-man video team using four operating cameras and three point-of-view (POV) cameras, two of which were located on Al’s drum kit, filmed the band, the crowd, and more, projecting the images onto the giant screen. The MTV-banned “Amsterdam” video was also shown on the Jumbotron and at the end of each show, the Balance cover twins would appear, saying their goodbyes to the audience.

Alex drank a homemade garlic and carrot drink each night before taking the stage, that had a tendency to leave a rather garlicky-smell all around him and his drum kit. This practice made Al the butt of many jokes. His solo featured a segment where he played against a recording of himself, showering the crowd with a rather Latinesque treat.

Edward brought “Franky” out on the tour during the first leg, but ended up not using it for unknown reasons. Edward also played one of his Ernie Ball Music Man guitars from time to time. Early in the tour, Edward began to experience intense pain in his hip, which was later diagnosed as Avascular Necrosis. It was common to see him standing relatively still for most of these shows, even sitting on a red, white and black striped stool on more than one occasion. By tour’s end however, he was much more active, either getting used to the pain or doing a hell of a job masking it. His solo featured several Roth-era song teasers including the verse section to “Mean Street” and the intro to “Runnin’ with the Devil”, as well as a nod to the 5-note communication sequence from Close Encounters of the Third Kind. The final leg of the tour featured the guitarist following in Al’s footsteps: he also played against a recording of himself.

This tour featured the band opening for Bon Jovi on the European leg of their tour. The reasoning behind this move was that the band needed to broaden their European fan base. What better way to do it then play alongside Bon Jovi, who are downright huge in Europe? A plethora of other bands also shared the bill on Van Halen’s European dates, including Thunder, Ugly Kid Joe, Crown of Thorns, Slash’s Snakepit, The Pretenders, Otto, Little Steven, and others.

The band grossed a staggering $32.7 million in support of Balance. Other top grossing acts for the year included the Eagles with $56.6 million, the Grateful Dead, R.E.M., and Page & Plant. 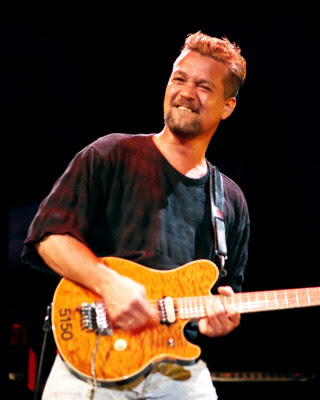 MERCHANDISE from the Balance tour available from Van Halen Store: