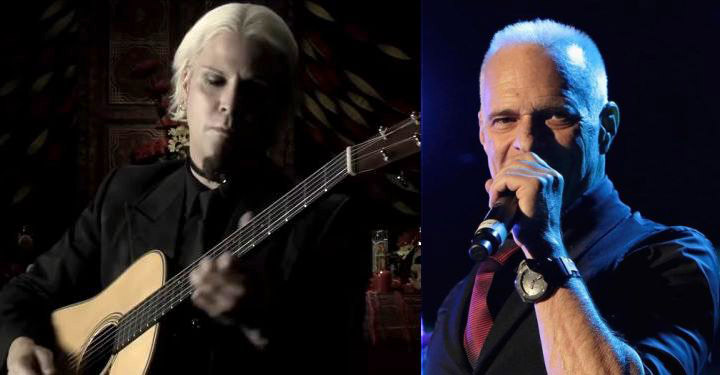 UPDATE 5/15/19: Today John 5 told VHND that it was actually early 2007 when David Lee Roth and himself recorded together. (Other websites report the date as years later).

Back in March guitarist John 5 said that his unreleased acoustic album recorded with David Lee Roth may eventually see the light of day. This week he gave fans a preview of what that music will sound like.

“No one has ever heard this, but I’ll play you a little bit of that David Lee Roth record,” John 5 told a pleasantly surprised Derek “Mr. Shred” Thomas, who recently interviewed the guitarist for the podcast “Talking Shred”.

Before we hear that audio, let’s get you caught up on the backstory regarding John 5 and David Lee Roth’s somewhat secret recording sessions. Since working with The DLR Band in the late ’90s, John 5 remained friends with Roth in the years that followed. John 5 told VHND that in early 2007,  the two joined forces to record a batch of songs for a possible album along with Roth’s former solo band-mates, Gregg Bissonette (drums) and Brett Tuggle (keyboards).

Not long afterwards, John 5 revealed to Guitar World that they had, indeed, completed a full album. Then came the crickets… nothing new was heard of regarding that project.

That was until this past winter when John 5 told Metal Titans, “I think [the album] will see the light of day, I’m banking on it, because it’s such a great record. I can’t say for sure, but I think Dave is working with Van Halen right now, which is wonderful. I’m happy for him, that’s one of my favorite bands! I think it will come out when Dave is ready to release it. I think you’ll love it, it’s a wonderful record! I’m so proud of the album.”

This past week, John 5 had more to offer up regarding the John 5/DLR project when he appeared on the “Talking Shred” podcast.

“There was this time where we would write songs early in the morning and then he would rent out the studio at night,” said John 5. “We’d write, write, write and then go into the studio. We did that for a long time and we had a collection of music.”

Then John 5 surprised Thomas by playing a short clip of a song called “California Sessions” from his phone: (Song clip starts at 22:22)

After playing it, John 5 brought up the similarity between “California Sessions” and Roth’s 1988 solo track “Damn Good” from his album ‘Skyscraper’. What’s even more interesting is the lyrics sung by Roth in the clip which we can only assume are about his early days touring with Van Halen. Listen closely and you’ll hear him sing: “We laughed, we cried, we threw the television off that balcony, that memory means so much to me…”.

Could Roth be singing about the now legendary night in 1978 at the Sheraton Inn in Madison, Wisconsin where the band trashed the 7th floor and threw TV’s, furniture, toilet seats, and telephones out the windows?

If you want to hear some more of John 5 on the acoustic guitar, check out this video for his song “Noche Acosador” from his 2012 album ‘God Told Me To’: