From the San Francisco Chronicle:

Believe me, I don’t want to be the one to defend Van Hagar. I’ve spent nearly five years building a peaceful community on this blog, only to throw it away faster than you can sing the chorus to “When It’s Love.” (Please don’t.)

But while you will never see a discussion of circumcision or breast-feeding on this so-called parenting blog, we do tackle music controversies. And I’d like to defend Van Hagar.

With each new piece of Van Halen news over the years — most recently a report that Van Halen is working on a new studio album with David Lee Roth — a new round of Hagar bashing emerges. Was the Van Halen era with Sammy Hagar as lead singer a downhill slide? Yes. But he’s not to blame.

My Chronicle colleague Joel Selvin wrote, in a review of the Van Hagar “5150” tour in the mid-1980s, that Sammy Hagar ruined two bands when he joined Van Halen. (Hagar responded by giving out Selvin’s phone number to the crowd. I was 15 years old, and in attendance. I swear I didn’t call, Joel …) But looking with a quarter century of retrospect, I would argue that Hagar saved Van Halen. As you can tell by the song “Jump,” the band was headed in the wussy synthesizer-heavy direction come hell or high water. Shedding David Lee Roth and bringing in a new lead singer provided the clean break that was necessary to explore these murky waters.

And when the band was done, and the world gave its verdict on Van Hagar, Roth could return and all would be forgiven — with the mercenary Hagar, not the architect Van Halen, taking the blame for any post-“1984” sins. During the last tour, Van Halen (with Eddie’s son on bass) was able to pretend like the latter half of the 1980s and most of the 1990s didn’t happen. That would have been impossible if Roth stayed in the band. 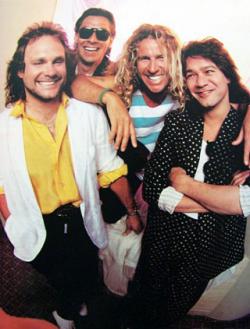 Hagar may have been the fall guy, but he wasn’t a phony. Van Halen got exactly what they hired — Hagar’s persona and style didn’t change when he joined Van Halen. Hagar didn’t force Eddie Van Halen behind the keyboard. Hagar wasn’t the one who cut Eddie’s hair. Hagar didn’t even write the most offensive songs. And he was never a habitual douchebag. In the history of Van Halen, only Michael Anthony (whose benevolence included thanking Van Halen III singer Gary Cherone during his Hall of Fame speech … and look how he was rewarded …) was a nicer guy.

Finally — and I’m bracing for your rebuttal — Van Hagar did make some very good music. The band had more than its share of near-apocalyptic missteps. (Start here.) But I’ll maintain that in the 13 or so years Hagar was a member, the band produced enough quality music for one very solid hard-rocking Van Halen album.

I have this playlist on my iPod, filed under “decent Van Hagar.”

1. Poundcake: I consider this the band’s attempt to apologize for the early Van Hagar years. After nearly a decade of love songs, Eddie pulls out some power tools and the lyrics appear to be entirely about a girl’s ass.

2. Best of Both Worlds: Alex Van Halen sounds like he’s in a retirement home, but Eddie and Sammy are definitely in sync here. The best song off the “5150” album.

3. Finish What Ya Started: It’s a bit soft, but so were several Van Halen songs in the 1970s. The hook is great. This could easily be a Roth-era song.

4. Aftershock: Some of Eddie Van Halen’s best post-Roth guitar work. The song rocks pretty hard, and Hagar mostly stays out of the way.

5. Black and Blue: This is my favorite Van Hagar song. The relentless sincerity that marred the Van Hagar era is missing, and Van Halen sounds like a complete band.

6. Summer Nights: Strictly filler, but they had that on the older Van Halen albums, too.

7. Runaround: OK, the argument is starting to come apart here … . The first 1:06 of this song is good, and then it all falls to pieces. But you know what, I fast-forward past the chorus of “Dance the Night Away,” too.

8. 316: A harmless and short guitar interlude, named after the birthdate of Eddie’s son Wolfgang. It’s not “Eruption,” but neither was “Jump.”

9. 5150: I almost put “Why Can’t This Be Love” here, but figured I would lose the three people who are still with on my side. Alex Van Halen actually sounds like he’s trying on the title track “5150,” which almost never happened in the latter half of the 1980s. And the lyrics make absolutely no sense, which was always the safest route in the Van Hagar era.

Hate the Sammy Hagar years of Van Halen if you must. But don’t blame the man. Even if you didn’t like the music, he was more of an innocent bystander than an accessory to the crime.

PETER HARTLAUB is the pop culture critic at the San Francisco Chronicle and founder of this parenting blog, which admittedly sometimes has nothing to do with parenting. Follow him on Twitter at www.twitter.com/peterhartlaub. Your questions answered on VYou at www.vyou.com/peterhartlaub.