You are here: Home / Eddie Van Halen / EVH’s Two and a Half Men Riff, Extended Version 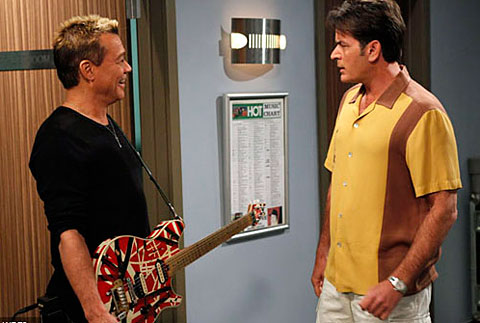 Did you see Edward Van Halen on the Two and a Half Men TV show last year? Naturally they left him until the last part of the show, but for Ed fans the wait was worth it – because Ed had a guitar in his hands and proceeded to whip off 10 or so seconds of smokin’ riffage, bum thumb and all.

I don’t know what I expected, but judging from my reaction it was something slower. Easier, maybe. Why, I don’t know. Whatever the case, I re-played the riff about 8x with the TiVo, grabbed one of the guitar lyings around (literally!) the living room and tried to figure some of it out.

It’s a cool riff, but to get an appreciation of just how cool it is you need to go back a few years – six, to be exact. A couple of the EVH sleuths at the MetroAmp forum remembered that riff from a semi-obscure series of videos titled “Ed behaving badly” at the 2003 NAMM show.

I watched/listened to those vids years ago, and forgot about that particular riff until I was reminded. Even though Ed seems a little “odd” (booze?) in those vids, his playing as usual is killer and that “wicked F-ing boogie,” as he calls it, (the Two and a Half Men riff) is sweet!

In the vid you can see how his strange pick grip works for him, and how rhythm means everything to him. You’ll see what I mean.
READ THE REST at WoodyTone.com: