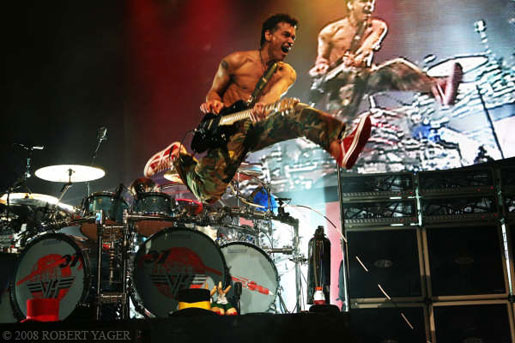 (Los Angeles, CA) June 5, 2008 – Nearly a million fans journeyed from all over the world to witness the landmark VAN HALEN tour, which kicked-off in September of 2007 in Charlotte, NC and wrapped up June 2, 2008 in Grand Rapids, MI. VAN HALEN, featuring Eddie Van Halen, David Lee Roth, Alex Van Halen and Wolfgang Van Halen delivered their bombastic live assault performances to legions of loyal fans at 75 arena concerts throughout the U.S. and Canada.

Performing live with Roth for the first time in more than 23 years, VAN HALEN proved its timeless catalog of hits still packs the punch it did decades earlier. Each night, the band treated the capacity audiences to a dream set list of more than two hours of VAN HALEN gems plucked from their original era. Favorites including, “Jump”, “Ain’t Talkin’ ‘Bout Love”, “Panama” and more, received a jolt of vivacity and spirit.

“We send our thanks to the countless new and lifetime fans that helped make this tour our most successful,” said VAN HALEN in a joint statement. “We also send special gratitude to the tireless efforts of the VAN HALEN touring crew, Live Nation and the media, as well as opening acts Ky Mani Marley and Ryan Shaw,” the band went on to say.

Now that the final bits of confetti have fallen, VAN HALEN has their sights set on bright horizons with exciting developments on the way.