You are here: Home / 1980 / The story behind the classic 1980 David Lee Roth poster by Helmut Newton 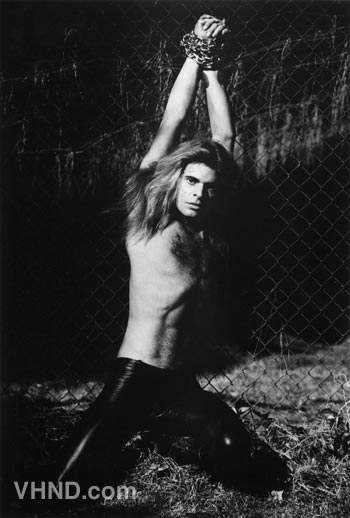 When Van Halen’s Women And Children First was released on March 26th, 1980, a three-foot black and white poster of David Lee Roth, bound to a chain-link fence, was included in the first million pressings. The photograph was taken by famed fashion photographer Helmut Newton. It was used for shock value. Many fans are unaware of the story behind this very rare, classic poster.

In 1979, when Van Halen would take breaks during their “World Vacation” tour, Roth would head right for Studio 54, where he would sometimes spot Helmut Newton there. When it came time to do the third Van Halen record, he told the band that Newton should shoot a picture for the album.

In his autobiography, Crazy From The Heat, Roth recounts the story of how he met Helmut Newton and how the classic poster came to be:

The record company’s art department said “Oh, no way. This is a fifty-thousand-dollar-a-shoot guy. He doesn’t deal with this kind of rigmarole…”

Lo and behold…(which sounds like a legal firm)… Helmut Newton is having a showing at the G. Ray Hawkins Gallery on Melrose. And I says to myself, “He can only be staying at one of four hotels, let’s start calling.”

I called the Beverly Hills Hotel, on Sunset Boulevard: “Excuse me, may I please speak to Mr. Newton?”

He picks up the phone, and I say, “Good afternoon, Mr. Newton, my name’s David Lee Roth. I’m very aware of your talents and who you are. I’m sure you’ve never heard of me, but I’m in a rock band called Van Halen, and we’re flavor of the week. I think we should shoot a photo.”

He said, “This is very interesting. I’ve never had an approach like this. Did you call my agent?”

He said, “Precisely. I like your attitude. Come on down to the pool and let’s have a look at you.”

I said, “Great.” Put on leather everything- riding boots with the leather pants, chaps with the jacket, the belt, and I went down to the hotel. He was lounging by the pool.

I sat down, and we talked everything from politics to mathematics for about half an hour, then he leaned over and said, “Do you know what, David? You are my new favorite blond. I would love to shoot photos of you.”

I said, “Spectacular. When?”

And he said, “What are you doing for the rest of the day?”

I said, “Oh, yes. I have a Mercedes-Benz that I just had painted black, with a big skull and crossbones on the hood of the car.”

He said, “Magnificent! Let me go to my room, get me my camera gear, my wife, Alice Springs, is a stellar photographer in her own right. Would it be okay if she comes along?”

“Great. We’ll find her, we’ll get our gear together. Do you have a place to shoot?”

I said, “Well, I have a dog pound in my backyard, with a lot of fencing.”

“Excellent! I’ll meet you in the parking lot.”

We made a poster: Me, chained up- it’s a very famous poster- in the dog pound, and enclosed it in every album. It was sold from there on in. Forty-five dollars. The last remaining print I know of has been sitting in my sister’s room folding up from humidity and the elements. And within the last two months, I had it framed and stabilized. This photo is easily worth ten thousand dollars. The photo of me, chained up in the dog pound, has been in every one of Helmut’s annuals.

For the first time since 1980, this classic poster is once again available to fans and collectors. It’s been reprinted and is now included in the rerelease of Women And Children First on 180 gram vinyl, available at VanHalenStore.com here.