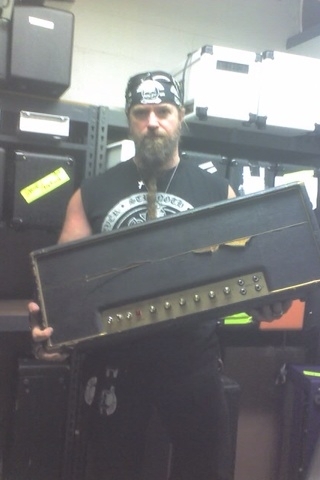 Here’s a picture of Zakk Wylde from Black Label Society posing with a true piece of musical history.

” I DON’T OWN ED’s Original Baby…. She’s Getting some TLC right now…”

” ED’s ORIGINAL HEAD is Being Overhauled…. This is the GRAIL though…. ”

“The first time I heard Van Halen it was life altering. Just like Black Sabbath, Led Zeppelin, and Jimi Hendrix, the good Lord put them down here to whoop some ass and teach everybody how it’s supposed to be done! Dave is the legendary frontman. Eddie is the greatest. You got Hendrix and you got Eddie. Mike is the Rock of Gibraltar and one of the coolest guys ever, and Alex is the foundation of the house. You got John Bonham, Louie Bellson, Buddy Rich, Mitch Mitchell, and Ginger baker. Alex is cut from the same cloth. Long live Van Halen.”